Desirable US delivery example, and one of just 300 “Rambo Lambos” built between 1986 and 1993. Recently out of long-term long term ownership and ready for adventure.​

The 1988 LM002 presented here is a fine example coming to us from long-term ownership in a significant private collection. Registry information shows this truck was delivered new to a buyer in Miami, Florida, and by the 1990s, it lived in New York before finding its current owner in 2004. Finished in black over a gray interior, this is an honest and original example that presents in good overall condition, showing just over 18,000km. Black is arguably the best color for an LM002, highlighting the truck’s aggressive nature and angular shape. The paint is glossy and generally sound, with some checking and crazing noted in several areas. The correct silver-painted tubular bumpers are in good order, as is the massive front skid plate. It rides on the factory-original steel wheels fitted with proper 345/60-R17 Pirelli Scorpion tires. The sale will include a spare set of extremely valuable sand-only Scorpions, which were a popular option in the Middle East, where unsurprisingly, the LM002 sold very well.​ 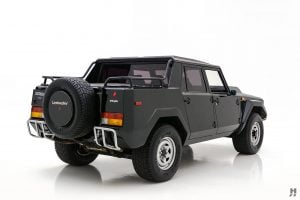 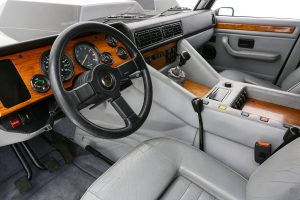 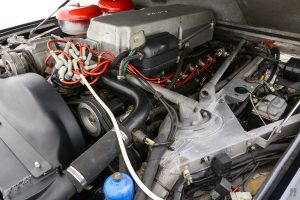