This breathtaking 1975 Lamborghini LP400 Countach is the 45th car produced and one of just 150 total early-style “Periscopio” models. According to the previous owner, this car was completed on April 11th 1975 and delivered new to Prince Bandar Bin Saud of Saudi Arabia, optioned with sports exhaust and adjustable Koni suspension. It remained with the Royal Family for several years before being gifted to their American personal physician, Dr. Terry Bennett. It saw very limited use with both owners, amassing fewer than 8,600 miles from new. At some point, it was repainted from its original black to Amaranto, and it joined a California-based collection. In the hands of its most recent owner, it has been treated to a bare-metal respray and restoration. It was previously believed that the car was originally red, however, factory records indicate was black over a white interior. It is now presented in striking Tahitian Blue over tan/blue interior and shows with fine quality paintwork and excellent panel fit. Detailing is sharp, and none of the original drama has been lost in the restoration.

The interior was subsequently restored to a very high standard, using correct-type leather, carpets, and soft trim. Seats, console, and sills are trimmed in beautiful tan leather which shows virtually no use since completion. Blue Wilton carpets provide a pleasing contrast to the hides, and the dash is covered in the correct brownish “mouse hair” suede. Original Stewart-Warner gauges feature in the space-age dash, with the unusual vertical odometer showing a touch over 13,800 kilometers. This car is equipped with factory air conditioning (a necessity in the Saudi desert), and it retains a period correct radio, original switchgear, and even the original Britax seatbelts……………………………………………….. 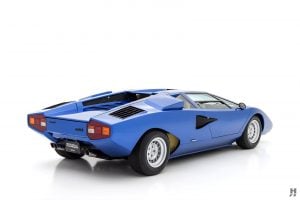 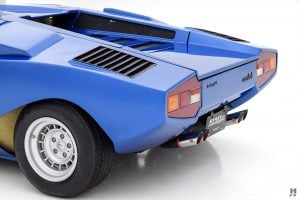 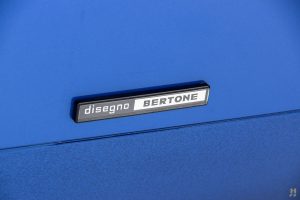 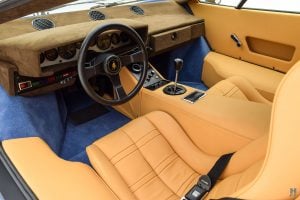