Chassis number LLBA9 is a genuinely unique motorcar and one of the six long-wheelbase S2s delivered to an outside coachbuilder. The story of this remarkable automobile is shrouded in much speculation about the identity of the person who commissioned its construction. According to documents sourced via the Rolls-Royce Foundation, LLBA9 was first ordered via New York-dealer J.S. Inskip. It was equipped in left-hand drive and delivered ex-factory to Wendler Karosseriebau of Germany; a coachbuilder with a long-standing tradition of building fascinating and beautiful designs of the highest quality.

Wendler’s first motor bodies were built in 1919, and they also supplied bodies for commercial trucks. Their portfolio is genuinely fascinating and includes many highly advanced streamlined designs on BMW, Mercedes-Benz and even Ford V8 chassis. Perhaps their most famous relationship was with Porsche, for whom Wendler bodied several road-going 356s in addition to creating the svelte coachwork for the legendary 550 Spyder, RSK, and RS61 racing cars.

The order for LLBA9 was curiously placed in the name of the buyer’s agent, factory records do not show the purchaser’s name, and his address is listed as the New York Yacht Club! Anonymity was apparently vital to him, though the thoroughly unique body he commissioned seems to contradict that idea. Incidentally, this was not the first car Wendler bodied for this particular mystery client. They had previously created a gorgeous one-off estate car based on the Mercedes-Benz 300 d “Adenauer.” The buyer’s request for an estate car directly from Mercedes was politely declined, so he commissioned Wendler to handle the conversion which was done masterfully. When it came time to replace the 300, Mercedes again refused to build an estate car on the W112 300-series chassis. So, he turned to Bentley to supply a coachbuilder-ready chassis.

Wendler followed their client’s wishes directly, creating a unique estate car (or shooting brake as it were) by grafting a Mercedes W112 300 body onto the Bentley chassis. Wendler reinforced the panels, and many of the factory Mercedes fittings were used, such as the lights and exterior trim. A significant number of parts had to be fabricated by hand to suit the scale of the Bentley chassis and the new shooting brake configuration. The result of the effort is a remarkable machine that is instantly recognizable as both a Mercedes-Benz and a Bentley, simultaneously. Perhaps the most distinguishing features are the “Heckflosse” tail fins that were a hallmark of the W112, which blend gracefully into the bodywork. The designer cleverly integrated bullet-style tail lights (sourced from a 1960 Buick) which are better suited than the square Mercedes lights. The proud Bentley radiator shell remains, and it is flanked by a pair of vertically-stacked US-market Mercedes headlamps. According to the original chassis order, a set of standard front wings were shipped from the factory to Germany; however it doesn’t appear that a single scrap of metal was used from them. The car’s appearance is quite imposing, and we find it curious that someone who worked so hard to remain anonymous would order such an extravagant motorcar………….. 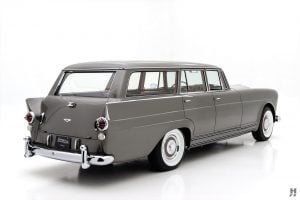 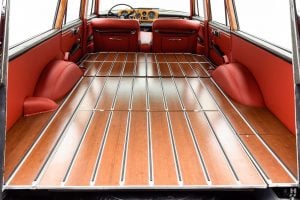 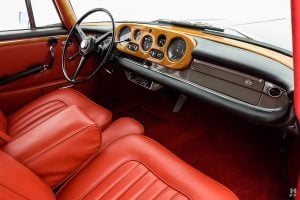 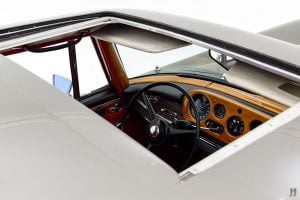