We are delighted to offer this truly outstanding, freshly restored 1958 Jaguar XK150 S OTS roadster. This Jaguar is a documented, factory built XK150 S, first delivered via a dealer in Atlanta, Georgia. It is finished as original in white over a red interior and black hood and highly optioned from new in “S” specification which included triple SU carburetors and a specially-developed cylinder head. Backing the 3.4-liter engine was a four-speed manual gearbox with Laycock de Normanville overdrive. Standard equipment included leather trim, Smiths heater, chrome wire wheels, and new for the OTS, roll-up side windows (replacing the XK120 and 140’s removable side curtains).

The first owner was Robert West of Athens, Georgia. Early in the car’s life, someone (believed to be Mr. West) drove the XK150 from Georgia to Detroit, Michigan. While in Detroit, the original engine was damaged, and the car subsequently parked up in a gas station. The second owner acquired the Jaguar in the early 1970s, putting it in his garage in hopes of returning it to the road. It seems that never happened, as in the early 2000s, this car was discovered, still in remarkably original and unrestored condition, by brothers Gary and Jim Kakuska of JK Restorations in Oswego, IL. Gary and Jim are highly respected Jaguar specialists, and they bought the car with the idea of restoring it for themselves, but ultimately sold it to one of their best clients who then entrusted them with the comprehensive nut-and-bolt restoration.

As they began disassembly, Gary and Jim noted that the car showed approximately 2,000 miles on the odometer. Closer inspection of the body, interior, and drivetrain revealed this was very likely the original mileage as the car was found to be remarkably intact beneath the years of dust that had accumulated while in storage. As a result, JK was able to restore and reuse a tremendous amount of the original components and fittings…………………….. 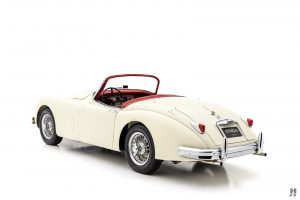 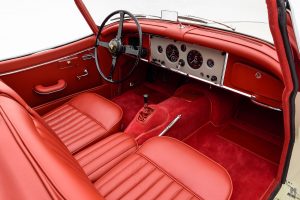 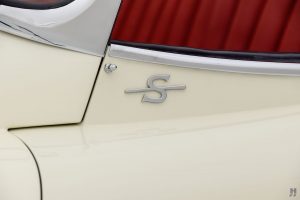 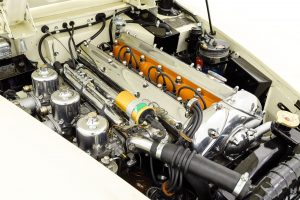