This 1955 300SL Gullwing coupe comes to us from long-term ownership in a large collection and is a generally sound and good running example with the potential to be a capable and enjoyable event car with some sorting. Documents show chassis number 198.040.5500154 was originally delivered in March of 1955 in European specification to Brussels, Belgium. This car is somewhat unusual in that it is equipped with a number of features that were primarily found on the first-year 1954 models, but as the changes were gradual, some 1955 cars were built with earlier features. Most notable for this car are the bolt-on wheel arch “eyebrows” with body color welting, as the later style were welded in place and the seams filled with lead. This car also features the early-type Bendix Treadle-Vac brake booster, and it is optioned with items such as bumper guards, Becker radio, and SWF windscreen washer. Other accessories include fitted luggage and dual Hella reversing lights………………………………………. 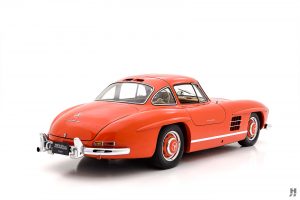 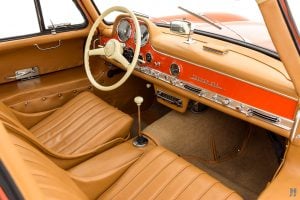 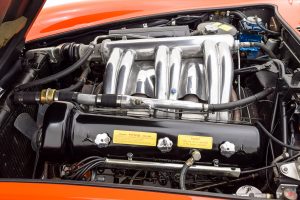