An exceptional J2X with fascinating and continuous history from new. Sold new by Noel Kirk Motors to Hollywood producer Albert Zugsmith and featured in his 1956 film “Written on the Wind.” Wonderfully original and beautifully restored to factory specs, including its original Cadillac 331 V8. Fully sorted by The Vintage Connection for rallies and tours. One of the finest of its kind available.

Proudly offered here is J2X 3144, a superb and unique Allard with a fascinating and continuous history from new. The story begins on November 19th, 1953, when Noel Kirk Motors of Hollywood, California, delivered chassis 3144 to Mr. Albert Zugsmith. The car was finished in attractive Olde English white over a black interior and equipped with the top dog Cadillac 331 under the bonnet. Albert’s son Mike Zugsmith later recalled that his father wasn’t much into cars, but his mother was, and she was the primary driver of the mighty J2X. Mr. Zugsmith was quite a colorful character, having made millions in his sales business before turning to filmmaking in the 1950s. Much of his early work fell squarely in the B-movie category, but he found widespread success with 1956’s Written on the Wind, starring Rock Hudson, Robert Stack, Lauren Bacall, and Dorothy Malone – who won an Oscar for best-supporting actress for her performance. Zugsmith’s Allard J2X featured prominently in the picture, painted a lurid shade of yellow for the role of Robert Stack’s “hot rod.” 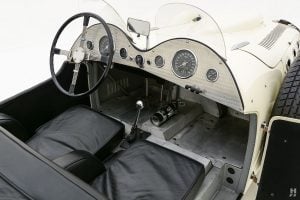 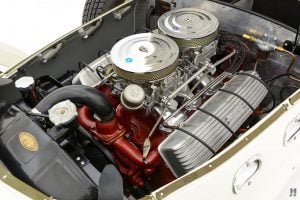 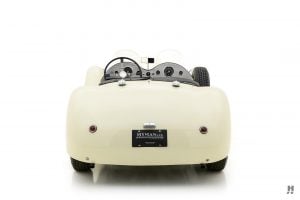