A highly desirable Pre-War D6-70, boasting stunning original coachwork by Figoni et Falaschi. The subject of a recent cosmetic and mechanical freshening, and ready for touring or show. A superb sporting motorcar from the pinnacle of French performance and style.

Wearing stunning 3-position drophead coachwork by Figoni et Falaschi, this eminently desirable pre-war Delage D6-70 is a magnificent example of le belles voitures Françaises. According to marque experts, chassis number 51740 is the second in a series of four similar Delages bodied by Figoni et Falaschi between April and June of 1939. It wears its original coachwork, verified by the Figoni serial number (757) found throughout the car. Delage and Figoni historians believe this example debuted at the 1939 Concours d’Elegance au Bois de Boulogne, where it took home a well-deserved gold medal on its maiden outing. However, the car’s early concours career was cut short, as war enveloped Europe, and the owner hid it away in Portugal to keep it safe from occupying forces. It remained there after the war, quietly undisturbed until its discovery in 1974. Following its discovery and sale to only its second owner, 51740 was restored in Europe and lived a relatively low-key life before making its way to the United States in 2001. In 2006 the Delage joined the private collection of an enthusiast who lovingly maintained and enjoyed it on casual events and outings. 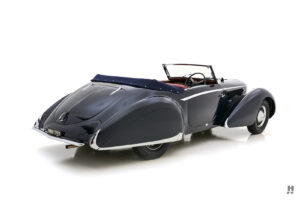 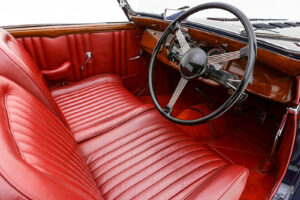 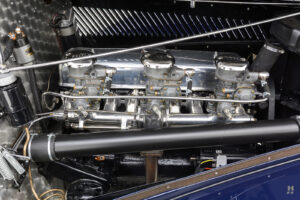