An incredible American Icon, recently out of 55 years continuous ownership. Presented as restored by the ACD factory in the 1950’s and with fascinating history. A one-off opportunity to acquire a true legend.

The Auburn 852 Speedster has become a truly iconic American performance car that has earned its place among the most collectible and desirable motorcars of the era. Many have copied its looks, but of course, nothing can capture the magic of the original thing.

We are very pleased to offer this genuine 1936 Auburn 852 Supercharged Speedster. The story of this remarkable car picks up in the early 1950s when it was purchased by Mr. Cal Grosscup of Auburn, Indiana. Through conversations and written correspondence with Cal Grosscup Jr., we learned that his father’s Auburn 852 was enjoyed by the family for several years and while in his father’s care, it was handed over to Dallas Winslow at ACD for a cosmetic restoration. Mr. Winslow made his fortune buying and liquidating failed industrial and automobile companies. He purchased the remaining assets and naming rights for Auburn Automobile Company in 1938, and rather than liquidating what was left of Auburn, he set up shop in their magnificent administration building and offered parts and services for the now-orphaned Auburn, Cord and Duesenberg automobiles.

Upon receiving Cal Grosscup’s Speedster, Winslow’s team carefully disassembled the exterior trim from the car, restored the chrome and repainted the body in the distinct terra-cotta color it still wears today. The period correct air horns were added at this time and the rear axle was rebuilt using genuine NOS parts from Winslow’s stocks. The car and its “rehabilitation” were featured in an article as well as on the cover of the very first issue of Car Life Magazine, February, 1954.  A copy of the magazine, as well as period photos provided by Cal Grosscup Jr. accompany the sale of the car………………….. 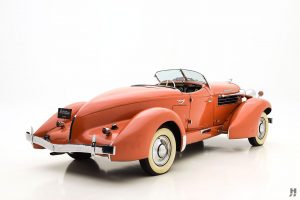 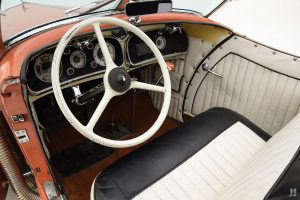 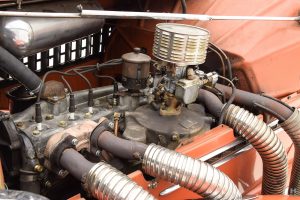 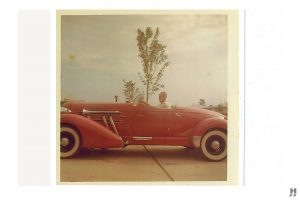