This highly desirable, genuine 6C Super Sport wears unique coachwork and has a fascinating history with 60 years of continuous ownership. FIVA Registered and ready for concours and road events the world over.

We are very pleased to offer this stunning 1929 Alfa Romeo 6C 1750 SS, chassis number 0312901. Built during the 3rd series of 6C production, this is one of just 121 series 3 cars produced, and one of just a handful of known survivors. While details of the earliest history have been lost to time, various records and expert opinions compiled by the likes of noted author and Alfa Romeo historian Simon Moore help us paint a picture of its story. Historical archives in Milan show no record of the car registered in the city, so it was likely delivered elsewhere in Italy, most likely fitted with sparse torpedo roadster coachwork. We know that by the early 1930s the car would appear in England where it was believed to have been updated with the coachwork it wears today, though Angela Cherrett, a highly respected marque historian, shows no records of the car in England prior to that, so it likely changed hands early in its life and came to England in the early part of the 1930s.

John de Boer, also a highly respected marque historian believes S/N 0312901 was likely delivered with sporting “torpedo” coachwork as several examples close to this serial number were similarly bodied. It is understood by both Moore and de Boer that the car’s sparse original coachwork was updated in about 1935 when its then-owner saw Alfa’s magnificent new 8C 2900 on the stand at the London Motor Show. He commissioned a body inspired by the big 8C, but one that retained its own unique character. Constructed in steel and without doors, the sleek and stylish coachwork was built for fast road use rather than outright competition, as doors were generally required for full competition use at the time. 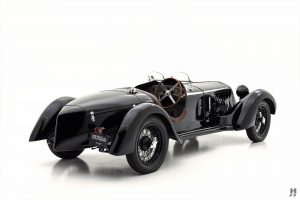 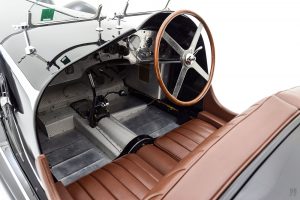 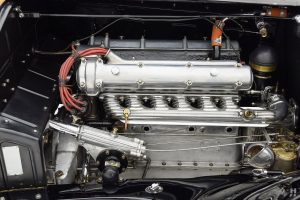