Exquisitely presented and ready to race, one of the fastest and most advanced machines to come from the storied Group 44 racing team. A proven race winner, driven by legends like Tullius, Haywood, Redman, Bundy and Robinson.​

Our featured XJR-5 is chassis number 010, the very last car built and raced in-period by Group 44. Approximately 13 cars in total are known, though three have been built up from spares. Chassis 010 raced in the 1984 and 1985 IMSA seasons and features numerous developments that set it apart from earlier cars. Most notable is the addition of fuel injection (early cars ran Weber carburetors) that allows the 6.2 liter Jaguar V12 to develop nearly 650 horsepower. Chassis number 010 was run in-period by a laundry list of legendary drivers – Doc Bundy, Chip Robinson, Brian Redman, Hurley Haywood and of course Bob Tullius – and it carries their signatures on the tub. Wearing race number 04, it won the 1985 Road Atlanta 500KM with Redman and Haywood. As #44, it scored several more podiums and top-tens in its career, mainly with Tullius, Robinson, and Bundy at the helm. This car was also sent to Le Mans twice, though only to serve as a backup for chassis 06 & 08. It remained with Tullius until 2008 when it was sold to a noted racer and collector, Rick Knoop. More recently, it has participated in the Daytona Classic 24, the Palm Beach Historics and multiple Monterey Historics (with F1 veteran Stefan Johansson driving on one occasion).

Benefitting from a meticulous restoration in 2008 led by Rick Knoop and Jim Busby, XJR-5 010 presents in stunning concours-quality condition yet it remains fully sorted and ready to race. The original bodywork has been fully restored in its iconic Group 44 livery, with exquisite paintwork and detailing. The chassis and original alloy tub have been fully rebuilt, and it is plumbed and wired with the same meticulous care that Bob Tullius would have insisted upon in 1984. The thundering 6.0-liter Jaguar V12 has been fully rebuilt by Ed Pink Racing Engines and has fewer than 25 hours since the rebuild. While capable of a screaming 8500 rpm, the current owner has wisely kept it below 6000 to ensure longevity. Mated to the engine is a freshly rebuilt Carl Haas Hewland dog-box, complete with cryo-treated gear sets and a new differential. It is reported to be very reliable and an absolute joy to drive – even at speeds approaching 200 mph on the banks at Daytona. As a testament to its quality and presentation, it has been shown at the Amelia Island Concours, and won its class at the Quail Motorsports Gathering and the Carmel Concours……………………………………………….. 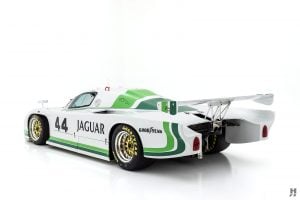 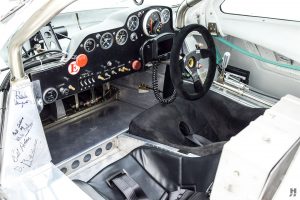 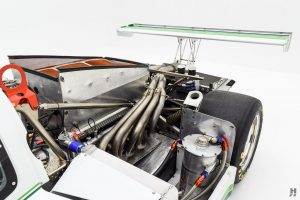