A striking 308 GTB finished in the rarely seen shade of Oro Chiaro Metallizzato. The subject of a meticulous, photo-documented specialist restoration and Red Book certified as a correct, numbers-matching example including original books, tools, and jack. A distinctive and gorgeous 308 for the discerning collector.

While the 308 has enjoyed a resurgence in recent years, it is still quite unusual to encounter one as meticulously restored as this gorgeous 1978 308 GTB. The fixed roof GTB is considerably rarer than the GTS, and early carbureted cars such as this are considered the purest expression of the formula. S/N 25239 is an exceptional, numbers-matching example, finished in the extraordinarily rare and striking color combination of Oro Chiaro Metallizzato with a beautiful dark brown leather interior. This car is the subject of a photo-documented nut-and-bolt restoration performed in Italy by marque specialists Red Cars International. It is impeccably finished to concours-quality standards inside and out. Photos in the history file reveal the meticulous attention to detail paid to every aspect of the restoration, from the exquisite paintwork to the correct plating of suspension components and hardware. Once the project was completed in 2016, the car went directly to the Ferrari Classiche department in Maranello to be inspected for its official “Red Book” certificate of authenticity. 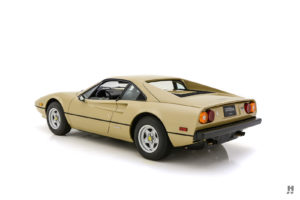 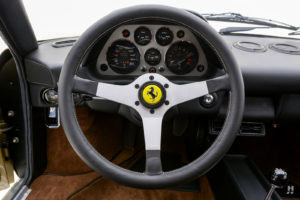 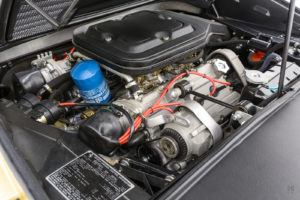