Remarkable in every respect, this beautiful 1974 E-Type V12 is one of the best examples we have encountered, fastidiously restored and treated to a host of carefully selected improvements by a Jaguar specialist at the cost of over $200,000. This car was sold new in 1974 by British International Motors of Hicksville, New York to Mr. C.D. Papadopoulos. After twelve years with the car, he sold it to Peter Livanos. A prominent Greek shipping magnate, Mr. Livanos is best known for his role as part-owner of Aston Martin in the 1980s. In the late 1990s, records show the car was in Texas, where it remained until 2008 when it returned to the Northeast. A new owner from England acquired the car in 2009, who immediately handed it over to the Jaguar restoration specialists J.D. Classics (now Woodham-Mortimer) for a complete restoration to J.D. Sport specification.

Presented in its original colors of white a matching factory hard top, blue cockpit and blue hood, this is a positively sparkling example with a marvelous restoration. Upon its arrival at J.D. Classics, it was meticulously disassembled and prepared for paint, while the engine and mechanical components were simultaneously prepped for a complete overhaul. The body was stripped, repaired as needed, undersealed, and painted inside and out to a very high standard in the original color. Panel fit and alignment is excellent, with crisp detailing. Cosmetic updates include attractive slim-line European bumpers, eliminating the rather ungainly US-spec overriders. Chrome and exterior fittings are excellent, and the headlights uprated to flat-lens H4s for vastly improved visibility. The finishing touch is a set of deep dish high-strength stainless wire wheels with chunky 205/70-15 Pirelli tires for the ideal stance and road presence. 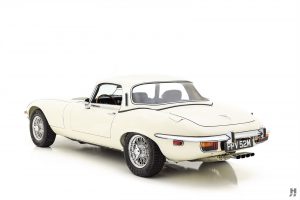 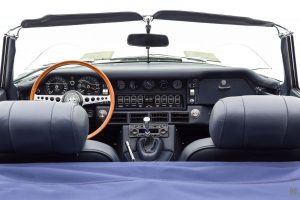 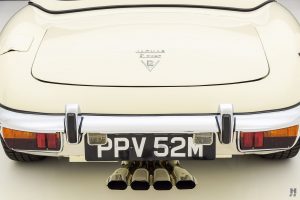 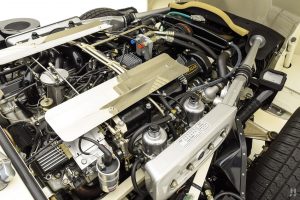