One of just 16 survivors of the original Series I Stutz Blackhawk. Stylish coachwork designed by Virgil Exner and built entirely by Carrozzeria Padane of Modena. Subject of a recent a recent nut and bolt specialist restoration. The best of its kind available.​

On offer is one of the finest examples of the highly exclusive split-windshield Stutz Blackhawk Series I available. This car comes from the private collection of a marque expert and is the subject of an eight-year, nut-and-bolt restoration finished to very high standards. The 17th of 25 produced, this car left the factory in black over a black interior, arriving in North America in November 1971. According to Richard Curotto, the former sales manager of Stutz Motorcars in America, he collected chassis number 276571A172808 at the docks in Quebec, drove it across the border, and continued to Manhattan in time for the New York Auto Show for display. It was sold shortly after the show, but records of the original owners do not exist. The history picks up again in the early 2000s when it was in the hands of famous Elvis impersonator Paul Casey, who cruised the Las Vegas strip in it. In April 2009, Mr. Casey sold the Stutz as a tired but running and driving car to Erik Nielsen of California. The most recent owner acquired it from Nielsen 14 months later, and soon embarked on a painstaking nut and bolt restoration. As a respected expert on these coachbuilt Stutz cars, the new owner spent untold hours sourcing the rare and unique parts lost to time and careless owners. Carrozzeria Padane also built the Maserati Mistral, Indy, and Bora alongside the Stutz, and many components came from the same bins. But some details were particularly challenging to source, including the original Lear Jet stereo 8-track player and the set of five 17-inch Firestone LXX wheels and tires, of which fewer than 50 sets were produced. The Blackhawk was the only car to feature the LXX-system from new. The ultra-rare wheels are included in the sale but are suitable for concours use and low-speed demonstration only. 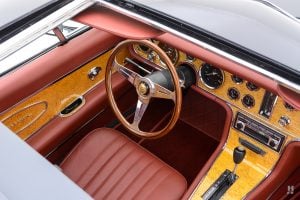 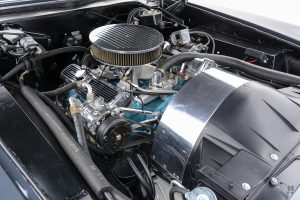