This 1971 365 GTB/4 is an original, European specification left-drive car, completed on September 1, 1970. The car was sold through the official Ferrari dealer, Motor S.a.s. di Carle Allegretti in Bologna, Italy and originally finished in Argento Metallizzato over blue leather. Serial number 13729 is an original and desirable “Plexi-nose” car, featuring fixed headlamps behind a full-width Plexiglas panel that was unique to early European models. In the late 1970s, this car was exported to the USA, with Larry Crossan of Loomis, California noted as the earliest known American owner.

In 1981, Mr. Crossan handed the car over to Michael Sheehan’s European Auto Restoration where it received an expert conversion to Spyder configuration. Mr. Sheehan had performed a number of these conversions, and his cars, along with those of Richard Straman, are among the most authentic and widely accepted. The quality and attention to detail make them difficult to distinguish from the Scaglietti-built originals. Aside from the sheet metal changes, Sheehan’s conversions also included a reinforced front sub-frame, strengthened windscreen frame, and steel inner fender panels to ensure no compromises to the handling and performance. 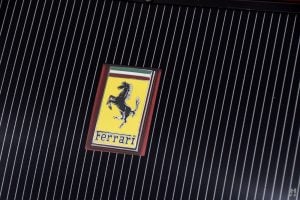 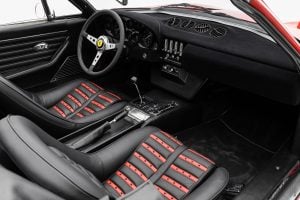 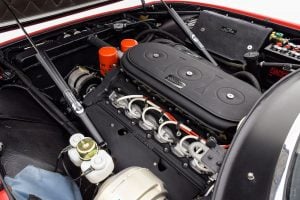