We are very pleased to feature chassis number 13933, a 1971 365 GTB/4 Daytona “Plexi” originally delivered in European Specification to the Canadian dealer Clarke Simpkins. The subsequent history of 13933 is well documented: In the late 1970s, the car was in the possession of Carl Cantera, a highly-respected Ferrari aficionado and collector. Early in Mr. Cantera’s long tenure with the car, it was entrusted to Richard Straman for conversion to open Spyder configuration and a change to its current livery of black over tan. Included receipts show Mr. Cantera enjoyed and maintained the car through the 80s and 90s before it was consigned to the legendary Ferrari dealer, Algar of Philadelphia in the early 2000’s. Subsequent owners would continue to cherish and enjoy this Daytona on the road and in casual shows.

In 2016 and in the hands of its most recent owner, S/N 13933 was treated to a comprehensive restoration performed by the respected marque experts Automotive Restorations, Inc. of Stratford, CT. The work included a bare-metal respray in black, as well as extensive detailing of the engine and chassis. In addition, the interior was retrimmed in tan leather with black “Daytona” inserts, fresh carpets, a recovered dash in correct mouse-hair material and a fully retrimmed trunk compartment as correct. It retains its factory-optional air conditioning for comfortable cruising in all conditions. The top was replaced with a new one in Haartz Stayfast canvas, custom made to original specification and precisely fitted………………………. 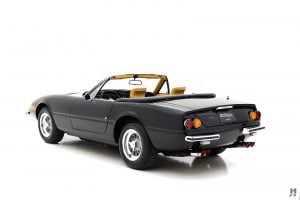 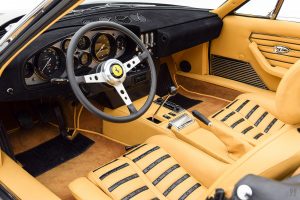 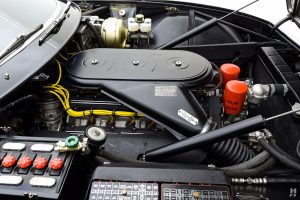