Genuine “wide-hip” 427 Cobra freshly restored by Mike McCluskey in street specification. One of the last 20 cars built. Known history from new, documented in SAAC Registry. Exquisitely presented and highly detailed. Ready to thrill its next owner.​

Our featured Cobra is CSX 3341, one of only 343 genuine coil-spring, big-block Cobras produced. A very late production example, this car is among the last 20 cars built by Shelby, and it presents in stunning condition, with a recently-completed restoration by noted Cobra expert Mike McCluskey. The history of this particular chassis is well-documented by the Shelby American Automobile Club. It was sold new to Richard Darnell of South Bend, Indiana by Romy Hammes Ford (also of South Bend) in July of 1967. SAAC registry information lists the original color as Rangoon Red over a black interior, and equipped with a 427 engine with dual-quad intake. After just one year and 1900 miles, Darnell listed the car for sale. A series of owners followed, with documents noting its appearance at the 2nd annual SAAC convention held in Hershey, Pennsylvania in 1977. There, it was recorded to show 30,000 miles, fitted with sunburst wheels, under-car exhaust exiting ahead of the rear wheels, and dark jade green paintwork. By the mid-1980s, it reappeared finished in Rangoon Red and with a correct-type replacement 427 engine built by noted Ford guru Jack Roush. In the early 1990s, it had passed through the hands of Mike McCluskey for the first time, where it received several updates including side exhaust, S/C wheel arch lips, and a hood scoop. Eric Bernhard of Entropy Racing installed a factory style 3-point roll bar and updated the suspension and brakes for vintage racing. At that point, the car was repainted in Viking Blue with white stripes. In this configuration, the car raced extensively on the West Coast, appearing multiple times at the Monterey Historics and the Wine Country Classic at Sonoma Raceway throughout the 1990s and early 2000s.

The current owner acquired the car from Gary Hunter in approximately 2011. In 2016 he commissioned Mike McCluskey to perform a complete, concours quality restoration and return the car to street specification. Still appearing very fresh, CSX 3341 is an absolutely exquisite example. Mr. McCluskey noted that while some minor chassis tubes were replaced over time, neither body nor chassis showed evidence of crash damage or severe corrosion. His team took great care to preserve the originality while returning the car to its factory street spec. It now presents in absolutely gorgeous condition, with correct under-car exhaust, proper street-spec wide-hip wheel arches, and no roll bar. The dark midnight blue paintwork and unadorned street trim accentuate the beautiful lines, and the quality of the finish is outstanding, with impeccable panel fit and detailing. Like the exterior bodywork, the inner panels are restored to exacting standards, with new foot boxes, inner trunk panels, and fender wells all appearing correct and beautifully finished. The process of the restoration is well-documented in a series of photographs. 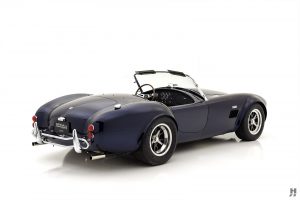 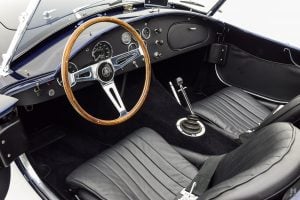 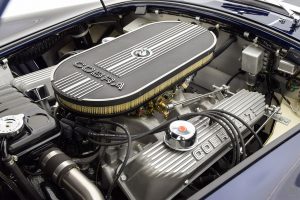 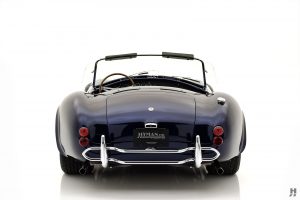