Rare Canadian-built Corsa with the 180-hp turbocharged engine and 4-speed transmission. Fastidiously restored to a high standard by a marque specialist. One of the finest restored Corvairs available.​

This 1966 Corvair Corsa Convertible is a truly outstanding example of Chevy’s unconventional cult-classic. It is one of the finest restored and meticulously documented Corvairs we have encountered, maintained in excellent condition since its complete restoration in 2005. Up until the end of the 1966 model year, GM built Canadian-market Corvairs in Oshawa, Ontario until new trade regulations allowed American-built cars to enter free of duty. In the final year of Canadian production, 6,500 Corvairs left the Ontario factory. Of those, just 211 were Corsa Convertibles, and 92 equipped with the turbo. The CORSA club estimates that approximately ten running examples are known to exist. This car, one of the rare Ontario-built Turbo Corsa Convertibles, was discovered in the late 1990s by Mr. Kent Sullivan, an avid Corvair enthusiast from Kirkland, Washington. A remarkably complete and original car when found, it still required a full restoration. Mr. Sullivan recognized this car as a rare and desirable Canadian-built Corsa Turbo, and he set about performing a complete, nut-and-bolt, rotisserie restoration to return it to factory-new standards.

While the restoration progressed, Mr. Sullivan set about documenting the car’s history. He obtained build records from General Motors Canada, as well as ownership history back to the original purchaser – Mr. Horst Kobs of Vancouver. The extensive history file includes copies of original registration, selling dealer information, and the names of every subsequent owner through Mr. Sullivan’s time with the car. Upon completion of the restoration in 2005, the car debuted at a CORSA club concours event, scoring a remarkable 98.10 points. The accuracy of the restoration is reflected in specific details such as the “Made in Canada” tags, and the body-color engine bay – sprayed black on US market cars. No detail was overlooked, including the Canadian-only battery polarity sticker, suspension assembly paint marks, and correct finishes on every component. Later, the Corvair featured in Hemmings Muscle Machines (January 2009) as well as on the cover of the CORSA Communique. 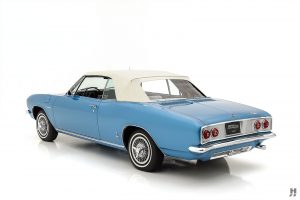 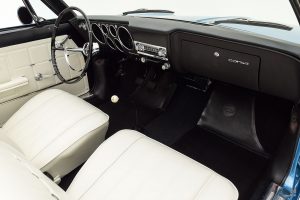 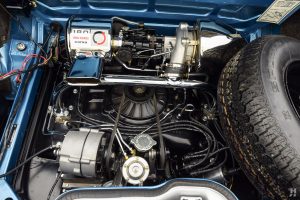