One of just 35 examples to feature this sophisticated design from Henri Chapron. Presented in original colors and specification, recently freshened after long-term French ownership.

It is with great pleasure that we offer this rare and beautiful 1965 Citroen DS21 Concorde coupe by Henri Chapron. This car is one of approximately 35 examples built by Chapron, and it is one of just six from the second series, distinguished by the “finned” rear wing treatment. Build records supplied by the coachbuilder show that chassis number 4.350.009 arrived at Chapron in October 1965, and was assigned the commission number 7550. It was completed and invoiced on the 10th of December, 1965.​

According to the documentation, Chapron built this Concorde to special order for Monsieur Jean Lavail. The build records list his business address as the prominent architectural firm CETAB – and this handsome Concorde was no doubt a fittingly sophisticated motor car for a successful French architect. Appropriately for a coachbuilt car, this example included a host of luxury options.  The high specification as listed on the build sheet includes power windows, leather trim, optional Jaeger instrument cluster, Radiomatic FM radio with automatic Hirschmann antenna, Marchal fog lamps (including a pair faired into the lower apron!) and Robergel wire wheels. The handsome Midnight Blue and Shell Gray livery it wears today is the original color scheme as specified on the build sheet. All-in, Mr. Lavail’s invoice totaled nearly FF 41,000, which would have been the equivalent of over $8,000 US Dollars. By comparison, a new Cadillac DeVille cost less than $6,000, and the exclusive Citroen would have been on par with the cost of a new Cadillac Series 75 Limousine. 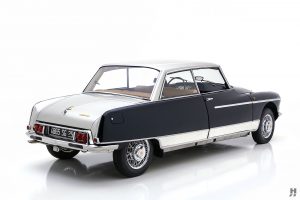 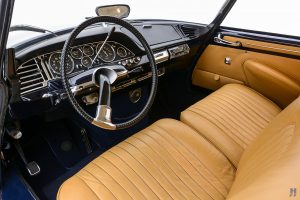 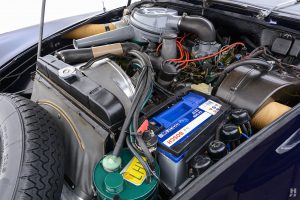