One of seven survivors of the open-topped spider. Recently treated to a body-off concours quality restoration. Jewel-like 1-liter engine, overdrive gearbox, four-wheel disc brakes. One of the finest ASA 1000’s in existence.​

This exquisite 1965 ASA 1000 Spider is one of just seven known survivors from a production run of only fourteen open-topped cars. The delectable Spider version of the ASA Mille debuted at the Turin Motor Show in 1963. The Bertone family resemblance to the GT sibling was evident, however, the Spider differed significantly in specification. For starters, the chassis was completely different. While still a Giotto Bizzarrini design, the Spider’s multi-tube backbone frame was completely different from the coupe’s traditional oval tube style frame. Suspension components were shared between the two cars, although the Spider used wider, 13 x 4.5-inch wheels all around. The body looked the same as the Coupe; however, it was built entirely in high-quality, lightweight fiberglass by Corbetta in Italy. The jewel-like engine, 4-wheel disc brakes, and four-speed overdrive gearbox remained unchanged. Thanks to the construction, the Spider weighed just 780 kg. The lovely little ASA Spider hit the market at the same price as the coupe, and despite its undeniable beauty, sales never took off. While reports vary, it is generally accepted that ASA produced only fourteen open-topped 1000 Spiders.

Chassis number 11014 is one of the finest surviving examples of the ASA Spider extant. In the hands of its most recent owner, it received a complete, body-off restoration finished to concours standards. It is believed this car appeared at the 1965 Geneva Auto Show and was then sold to a buyer in Spain, although little else is known about its early ownership history. Documents show the car was on the West Coast of the USA in the late 1990s, under the stewardship of Mr. M.J. “Tim” Matthews. At the time, it was finished in silver with a black interior and appeared to be a sound, driver-quality car. Around 2000, he sold the car, and receipts indicate it received an engine rebuild in 2002/2003. The current owner acquired 11014 from Hyman Ltd in approximately 2009, and he soon commissioned a complete, nut-and-bolt restoration. 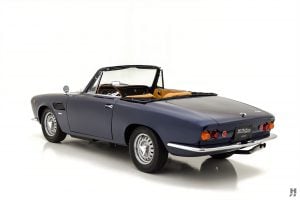 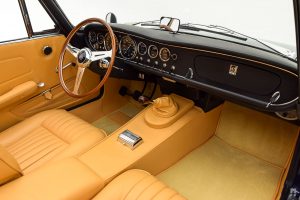 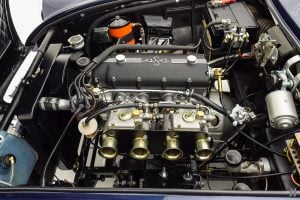 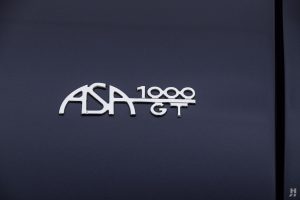