Our featured 1965 Alfa Romeo 2600 Spider is a highly desirable late-production example, well preserved in marvelous condition in crisp bright white over a red interior. The serial number denotes this as a very late-production Touring-bodied Spider equipped from new with desirable four-wheel Girling disc brakes and an improved electrical system with alternator charging. This 2600 is superbly well-sorted, with an honest, highly original character. Save for a respray and possibly an interior retrim some years ago, it has been cherished and well-maintained through the years, and feels as though it has never been completely apart. The bright white paintwork presents well overall, with some minor imperfections and touchups found under scrutiny, but with a character that invites regular driving. The bodywork displays consistent panel gaps and doors that shut with satisfying ease. Exterior brightwork is very good, and details include Carello fog lamps and the delicate Carrozzeria Touring cloisonné badges on the bonnet and front wings. Rolling stock consists of factory-correct steel wheels adorned with chrome center caps and fitted with period-correct 400 mm Michelin X radials.​ 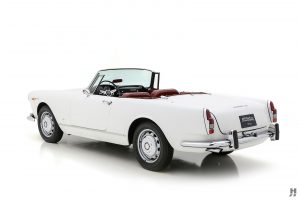 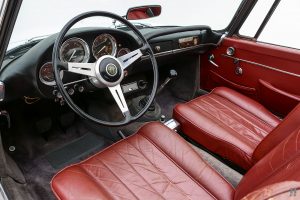 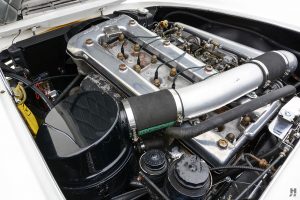