Among the very the best Silver Clouds we have encountered. Extensively restored in original paint colors and discreetly updated with modern A/C, improved electrics, and more. Comprehensive service history with marque specialists, including a recent cost-no-object engine overhaul. A truly outstanding, and well-documented Cloud III to use in RROC tours and concours events.

This superb 1964 Silver Cloud III saloon is one of the finest we’ve had the pleasure to offer. According to factory records, chassis SFU 153 is a home-market car ordered for Mr. James Leonard Seed, Esq, and delivered in the first part of 1964 via the official dealer W. Watson Ltd. The well-detailed build sheets show it was originally finished in Astral Blue with Shell Gray lower panels over red hides and maroon carpets. Options included electric windows, Dunlop tubeless tires, and B-pillar mounted combination turning/parking lamps. Ownership records show Mr. Seed held on to the car for many years, and it wasn’t until 1977 when the second owner was reported via the London dealer Jack Barclay Ltd. The second owner was William Pressdee, Ltd, a funeral home in Swansea that, incidentally, is still in operation today. By the early 2000s, the Silver Cloud had made its way to the United States, coming into the care of an east coast-based enthusiast. It was undoubtedly a very sound car at the time, judged to 379 points out of a possible 400 at the 2009 RROC meet in Williamsburg, VA. In 2011, the owner sought to elevate it further, commissioning the Rolls-Royce and Bentley specialists The Frawley Company of Parkesburg, PA, to perform a comprehensive cosmetic restoration. Between 2012-2014, the car was refinished to a very high standard in its striking, factory correct two-tone color scheme of Astral Blue over silver-gray sides, done to a very high standard using high-quality materials. Invoices for additional work come from the respected Richard Mullin Coachbuilding of Malvern, PA. 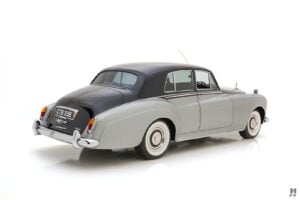 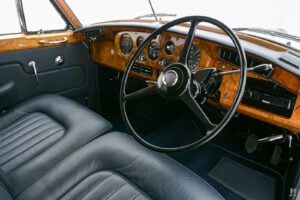 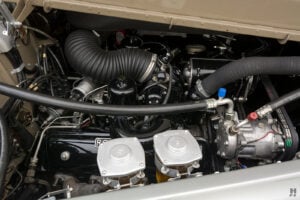