Exquisitely restored and meticulously updated with a fuel-injected, 2.5-liter Citroen CX Turbo engine, built with little regard to cost. A truly unique and exceptional example of the desirable Chapron Décapotable.

Beautifully restored and comprehensively upgraded, this 1964 Citroen DS19 Décapotable offers much more than initially meets the eye. On the surface, this is an exquisitely restored and finely detailed DS Chapron, finished in a gorgeous shade of metallic indigo blue with a blue canvas roof and tan leather interior. Lifting the bonnet, however, reveals a comprehensively built, turbocharged, fuel-injected 2.5-liter engine adapted from a later Citroen CX. From top to bottom, the restoration and subsequent improvements are beautifully executed. The initial restoration occurred around 2004, while the car was in Europe. The project is documented with a series of photographs, and copies of ownership papers place the car in Holland in 2006. In 2011, the Citroen came to the United States courtesy of an enthusiastic new owner who immediately had it serviced and prepared for touring and rallies. Around that time, it was decided to replace the original engine with something more powerful, while respecting the car’s rarity and importance. The owner then commissioned an Indiana-based prototyping/engineering firm to source, build and install a late-model CX GTi Turbo engine.

An impressive stack of invoices document the process, which took place from 2011-2013. So much more than a simple engine swap, an incredible amount of re-engineering took place to adapt the transverse CX engine into the longitudinal DS platform and have it fit under the bonnet. Before installation, the engine was rebuilt for additional power, refinement, and longevity. The 2.5-liter “stroker” crankshaft is micro polished, lightened and balanced, then paired with custom billet pistons and balanced connecting rods. Additional features include a ported-polished head with stainless valves, a specially designed cam, custom CNC-milled flywheel, and an updated turbo. Fueling and ignition are controlled via a standalone Motec M400 ECU, custom adapted with a hall-effect distributor, crank and cam sensors. A custom alloy radiator by Ron Davis keeps things cool, and the 5-speed gearbox has been suitably upgraded with gears made by Hewland. Countless other details ensure a seamless installation that, when the bonnet is closed, allows the car to be virtually indistinguishable from a standard model. 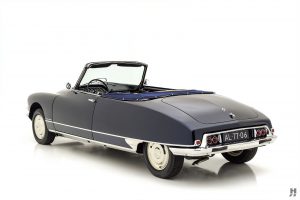 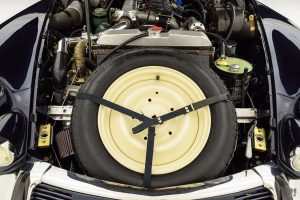 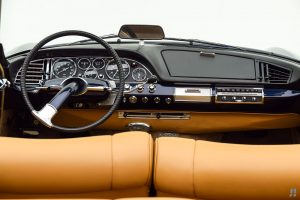