A genuine Bill Thomas Cheetah built for well-known racer and Chevy dealer Alan Green. The only factory-built street car, used in period as a promo tool for Green’s dealership. Subject to a superb nut-and-bolt restoration to exacting standards and presented in its correct 1964 livery and specification.​

Chassis number 007 is one of three Cheetahs originally purchased by Alan Green Chevrolet in Burien, Washington. Alan Green ran a successful Chevrolet performance dealership and was well-known for his support of road racing and drag racing in the Northwest and beyond. The three cars he ordered from Bill Thomas are 005, 006, and 007, and the first two were immediately put to work as road racers, while the third – this car – was given to Alan’s wife and used for promotional purposes, shows, and eventually drag racing. It was ordered in their signature shade of metallic green (naturally!) over a green interior and fitted with magnesium Torq-Thrust wheels and whitewall tires to give the illusion of a civilized street car. But this was no tamed cat, as it came equipped from new with a factory-built Chevrolet experimental 377 cubic-inch small-block V8 topped with twin carbs. A series of period photographs show Bill Thomas and racing driver Allen Grant posing with 007 in front of Bill Thomas Race Cars. Allen Grant is best known for his championship-winning career driving Cobras, but he did briefly venture across enemy lines in 1964, piloting another Alan Green Cheetah in a handful of West Coast races and chalking up a couple of wins in the process. In the photos, the Washington State dealer plate taped to the rear glass suggests Grant drove the Cheetah home from SoCal to Washington!​ 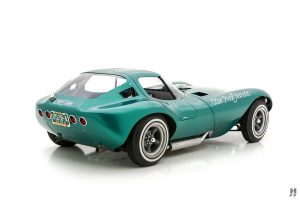 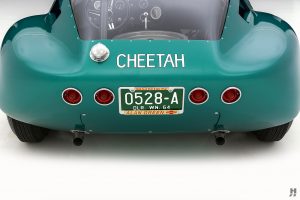 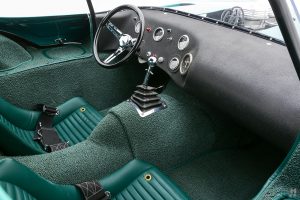