In July 1964, Mark C. Tower purchased this car, CSX 2197 from Crater Lake Motors in Medford, Oregon. According to the Shelby Registry, the car was delivered in red over black leather and equipped with the Class A accessories package, which included chrome rocker covers, white sidewall tires, luggage rack, radio, and 5-quarts of anti-freeze which brought the invoice total to $5493.05. Mr. Tower owned the car briefly, and by 1966, CSX 2197 was held by Howard Nettleton of Tacoma, Washington. Shortly after that, it went to John Stevens Jensen of California where it was registered “VNN 794”. Mr. Stevens owned the car for several years until he was killed in a road accident in another Cobra. From 1981, it passed through several more known short-term owners. Along the way, it was noted to have just 9,700 miles on the odometer though it did show some signs of past front-end damage. In the late 1980s, CSX 2197 would find a long-term home with Bill Kemper, a highly respected Cobra expert and restorer. In the early 1990s, he embarked on a long-term restoration, working on the car as time permitted, taking the utmost care as it was a personal project.

According to Mr. Kemper, the car had been unused since suffering a relatively mild accident, and he believed the sub-10,000 miles on the odometer to be accurate. He reported that the Cobra was entirely stripped down, the chassis properly repaired and precisely reinforced and updated based on Kemper’s specifications by Baurle Auto Sport of Addison, Il. The body was completely restored, with great care given to preserving as much original alloy as possible. The front outer panels from the doors forward were replaced, but the doors, rear clip, footwells and engine bay panels are said to be comprised of original metal, painstakingly restored to a very high standard and returned to its original red color. Today it presents in stunning condition, having been used gently in the hands of its most recent owner.

Kemper, of course, had the engine balanced, blueprinted and completely rebuilt along with the gearbox and rear differential. It extremely well-presented with much of the original hardware restored and replated, and detailed with correct labels and markings. It retains its correct, early-type Harrison aluminum radiator as well as the generator which was unique to these early Cobras…………….. 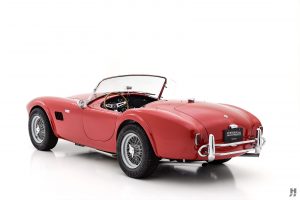 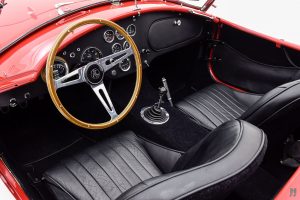 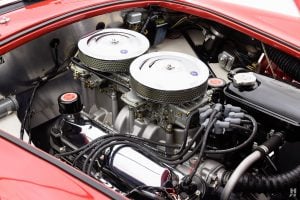