This striking XK150 3.8 Fixed Head Coupe is a late production model with many desirable options and features. It has had just a handful of long-term owners and it wears a high-quality and extremely well-maintained restoration that was finished in the early 1990s. The included Jaguar Heritage Certificate shows this 150 was delivered new on December 16, 1960, to Lt. Col. J W Regan. Finished in the very rare color combination of black on black, this car was specified with the 3.8-liter engine mated to a four-speed manual gearbox with overdrive. Other options include the Special Equipment package and a fabric Webasto-type sunroof which is a very rare option on the fixed head coupe. The original Periodic Maintenance Voucher booklet was first stamped in March of 1961 by Imperial Motors, Inc. of Wilmette, Illinois at 508 miles. Regular servicing continued through 1971 with the last stamp coming at 36,381 miles. It is believed that the car traveled with Lt. Col. Regan, from Illinois to New York where it was serviced by specialist George Haug Co. as late as 1966. It appears the car then traveled to England, where Murkett Bros. Ltd of Huntingdon maintained it, and finally by S.V. Robinson’s Garage of Kimbolton in 1971.

By 1974, this XK150 was back in the ‘States and in the hands of Michael Lee Bowman of Greenville, NC. An old title shows the Jaguar was traded or sold by Bowman to Cy Kay Motors of Illinois in 1983. By 1984 it had found its next long-term owner, Dr. Jim Owen of Dothan Alabama who would take exceptional care of the Jaguar for the next 30-plus years. An extensive collection of receipts for parts and service work in Owen’s name is included in the file, culminating with a comprehensive and high-quality restoration performed in the early 1990s. The body-off restoration is documented with photos and receipts, revealing the care and detail that went into returning this car to beautiful, better-than-new condition in its original black on black livery. As part of the project, the engine, gearbox, and overdrive were shipped to XK’s Unlimited for a full rebuild and the chassis was fully detailed to show-quality standards. 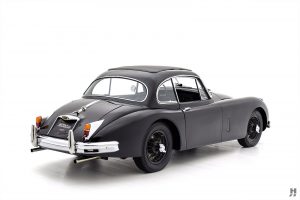 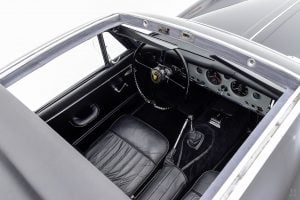 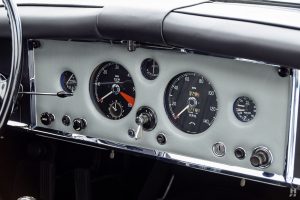 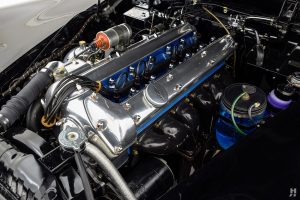