This beautiful XK140 OTS is a highly desirable “MC” model, equipped from new with dual exhausts, wire wheels and the free-breathing C-Type cylinder head. A numbers-matching example, this car was sold new on February 18th 1956 to Harold Hagy of Arlington Virginia for $3,552. A copy of the original sales invoice from Henry Miller Motors, Inc of Washington, DC lists the ID number of S811154DN. The “S” prefix indicates this as a special equipment model and the “DN” suffix shows it was factory equipped with the Laycock de Normanville electric overdrive unit. Photos of the car prior to restoration show it was delivered in what appears to be Mist Gray over a tan interior with a fawn top. Mr. Hagy lovingly cared for the XK140 in his time with it, amassing fewer than 20,000 miles in his 34 year tenure.

In 1990, Harold Hagy sold his treasured XK140 to Richard E. Williams, a veteran car collector and enthusiast known for his extensive collection of early Fords. Correspondence in the history file shows the car had just 19,640 original miles when Mr. Williams acquired it. Photos taken in 1990 show it to be in very tidy and straight condition, though the original paint was described as being tired. Mr. Williams subsequently had the car repainted in a very attractive shade of British Racing Green and restored the tan leather interior. Chrome wire wheels were fitted and the car was mechanically sorted and extensively detailed. It was enjoyed by Richard Williams until his passing, when ownership was transferred to his son Charles, of Darien, CT. Charles would continue to care for and enjoy the Jaguar for several more years before it passed to its most recent owner, an avid collector of significant Jaguar cars………………… 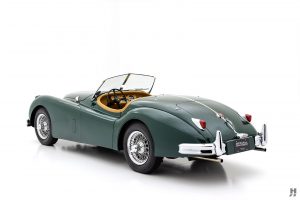 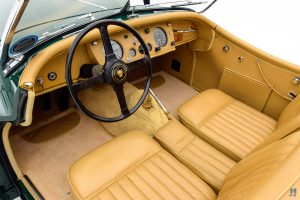 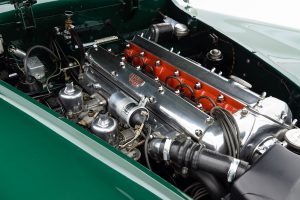