A genuine factory built “LeMans” confirmed by the 100M Registry. Delivered new to California and raced in period. Beautifully restored and ready for events worldwide.

Our featured 1956 Austin Healey 100M is one of those genuine and highly desirable factory-built examples, documented by both a British Motor Industry Heritage Trust Certificate as well as a 100M Le Mans Registry Certificate. It is a factory original left-hand drive car, built on the 11th of January, 1956, with original equipment listed as a heater, laminated windscreen and louvered bonnet, in addition to the Le Mans performance parts. It has had just four owners from new, with the early history showing it was originally delivered to John McCormick of California who, along with his wife Margee, raced the car in SCCA events in California, primarily at Palm Springs and Hourglass Field. A stack of California registration cards show he retained his beloved Healey through the 1970s and into the 1980s. In 1987, Margee McCormick sold the complete and highly original car to Gary Westwood of San Diego. Mr. Westwood rebuilt the drivetrain before selling the car on to Bill Lamping in the early 1990s. Mr. Lamping was then president of the Austin Healey Owner’s Club and eventually restored the car to the meticulously high standard it presents today. 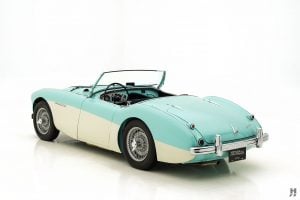 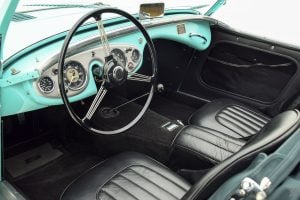 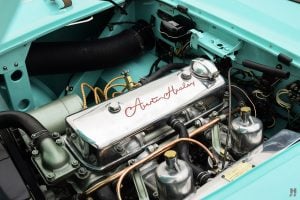 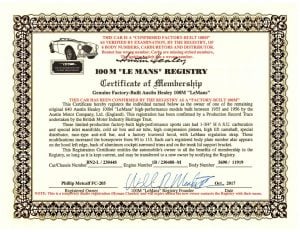