A genuine factory built “LeMans” confirmed by the 100M Registry. Delivered new to the USA and raced in period SCCA events. Beautifully restored and ready for events worldwide.

Our featured 1956 Austin Healey 100M is one of the genuine, highly desirable, factory-built examples, documented by a British Motor Industry Heritage Trust Certificate as well as by the Austin Healey 100M Le Mans Registry. This factory left-drive 100M wears serial number 232949, and was originally delivered to the USA in 1956. It is believed that the car was raced in the New York region of the SCCA in its early days, and in the late 1960s was sold to its second owners, Dick and Sharon Gunthell of North Salem, NY, who kept the car for the next 30 years. They eventually treated the car to a comprehensive restoration which was completed in 2002. The car was refinished in Old English White over a blue interior and was enjoyed for several years before being sold to the third owner, who in late 2010 handed the car over to BMC Classics of Florida for further restoration work and freshening.

While in the care of BMC Classics, the Healey was extensively refreshed and meticulously detailed to concours standards, with the work exceeding $20,000. This included a new interior trimmed in correct blue leather with white piping, and extensive under bonnet and suspension detailing.

Today, this rare and highly desirable factory-built Healey 100M remains in beautiful condition, most recently part of an important collection of post-war sports cars. The Old English white paintwork remains in very good condition overall and the chrome and detailing is finished to a high standard.  It retains the correct original louvered bonnet with leather strap, and of course the signature 100-4 folding windscreen. The Healey sits low on the road as it should, with its uprated dampers and sway bars and riding on chrome wire wheels wrapped in Dunlop radial tires……………………. 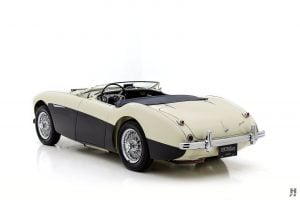 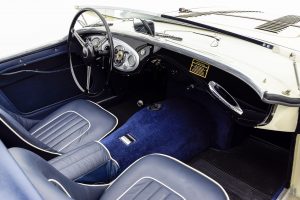 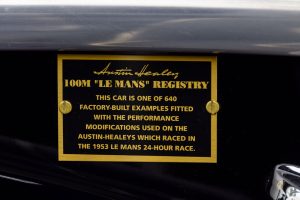 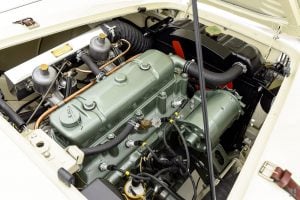