The “Holy Grail” of Austin-Healey motorcars, with exceptional provenance as a works Special Test Car, three-time Mille Miglia competitor, and 1956 Sebring finisher. Meticulously documented by Geoff Healey and Roger Menadue, and preserved in an unrestored state. One of the most exceptional, historically significant Austin-Healeys extant.

Before production of the sensational new Austin-Healey 100 sports car began in earnest at Austin’s Longbridge plant, twenty pre-production cars, numbered AHX1 through AHX20, were hand-built by a small team in Healey’s Warwick factory. According to Geoffrey Healey’s published memoirs, cars 5, 6, 7, 8, and 10 were left out of that sequence and set aside to serve as the official test cars. Of those five, three were designated works racing cars and assigned the numbers SPL 224/B, 225/B, and 226/B, with 227/B becoming the 24-hour record car. Developed by a team led by Geoff Healey and Reginald “Roger” Menadue, these three cars were the face of Austin-Healey’s international motorsports efforts in the 1950s. These so-called “Special Test Cars” were commonly known by their registration numbers – NOJ 391 through NOJ 393 – as well as their distinct light metallic green paintwork. Lacking the budget and resources to build new cars for every venue, the Healey team ran the Special Test Cars hard, continually rebuilding, developing, and modifying them to suit each challenge. They also served as rolling test beds for production parts, developing components integral to the production 100 M Le Mans and the ultra-desirable homologation special 100 S. 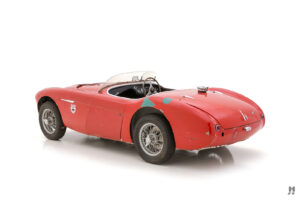 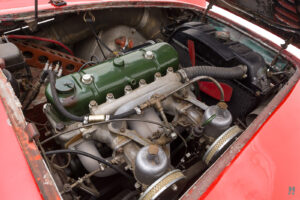 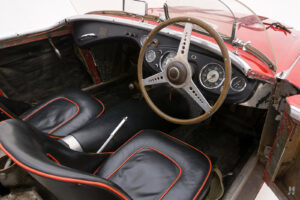