Our featured example is a highly desirable 166MM/53, wearing S/N 0300M, which was dispatched from the Ferrari works on April 1, 1953 wearing Vignale Berlinetta coachwork as per the build sheet. The 8th of just 13 Series II 166 MM’s produced, it was delivered via Garage Francorchamps to Jacques Herzet of Belgium who immediately set about competing in his lovely new acquisition. On May 17th of that year, Herzet competed in the Coupe des Spa, finishing second overall in is very first outing with the 166; no doubt a sign of things to come and hinting that his 166 MM had a particularly potent V12 under the bonnet. He enjoyed a tremendous run of success with the car, finishing on the podium in events such as the Coppa D’Oro, Rallye des Alpes, and a class win and 3rd overall on the grueling Liege Rome Liege rally. Herzet went on to finish second in the inaugural European Rally Championship in 1953; a remarkable achievement for a privateer entry. Herzet’s success was no doubt aided by his young co-driver, a then-18-year old Lucien Bianchi, who would himself go on to race in Formula 1, win the Tour de France Auto on multiple occasions, and win the 1968 Le Mans 24H overall in a Ford GT40.

When the Belgian weather turned cold, Mr. Herzet shipped his beloved 166 to South America and continued to compete; enjoying many more top finishes in Brazil. But the rigors of sport had taken their toll on the fragile Vignale coachwork, so less than a year after taking delivery of 0300M, he returned it to Belgium, entrusting it in the hands of designer and coachbuilder Martial Oblin. The brief was simple – make the car look fresh, but also make it lighter and thus more competitive. Oblin created a stunning design in the “Barchetta” (little boat) style. Gently sloping front fenders gave way to cut down doors that are highlighted by beautiful curved haunches. Form follows function with a bulged hood scoop to feed the trio of Weber carburetors, and a simple cut-down Perspex screen runs the width of the cockpit, revealing at this car’s purpose as a road-rally competitor. The Oblin body was indeed lighter, making the 166 a good deal quicker as a result. The completed car was shown at the 1955 Brussels Motor Show in a stunning and highly unusual matte charcoal color scheme, accented by a deep red stripe running down the center and along the rockers. This paint effect was very rare for the time and the car caused quite a stir, earning a place in the 1955 Ferrari Yearbook.

Despite its show stopping appearance, Mr. Herzet returned to competition with 0300M in numerous venues across Europe. Successful runs continued through the end of his tenure with the car in 1957. Rather unusually for the time, the majority of 0300M’s competition achievements came with the same driver/co-driver combination almost from day one…………………. 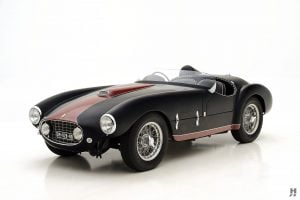 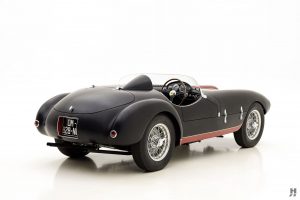 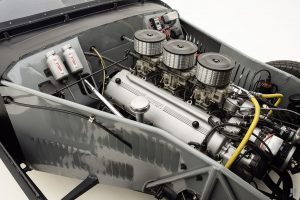