One of the earliest known examples of the B20 GT. Among the first 98 pre-production cars, with coachwork by Viotti. Recent high-quality restoration. Mille Miglia eligible and suitable for driving or concours events worldwide.​

Proudly offered here is one of the earliest known Aurelia B20 GT coupes in existence. Chassis number B20 1047 is from the first batch of 98 pre-production models, and the Italian Aurelia Register believe this to be a rare Viotti-built example. While the Aurelia B20 is widely regarded as one of Pininfarina’s masterpieces, the earliest pre-production cars were constructed by Carrozzeria Ghia or in the case of a handful of Aurelias, Carrozzeria Viotti. Dispatched on the 18th of July, 1951, chassis 1047 was finished in beige metallizzato over a nocciola (hazelnut) fabric interior. It remained in Italy through the 1990s, where it was later restored and updated with the desirable floor shift and early style sports manifold with twin Weber 32 DR 7 SP carburetors. After the Italian restoration, the car spent time in England before coming to the United States. In 2014, it received a major mechanical service and tune, before being offered for sale on the West Coast. In the hands of the most recent owner, the Aurelia traveled to the East Coast, where it was handed over to the specialists at Automotive Restorations, Inc, to receive a high-quality restoration totaling over $100,000. The body was taken down to bare metal, the metalwork carefully repaired and corrected, and resprayed in this striking shade of bright red. Furthermore, a full retrim of the interior was done, along with further mechanical sorting and tuning.​ 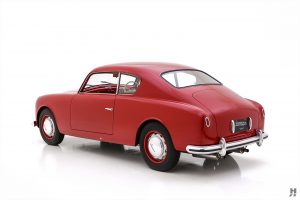 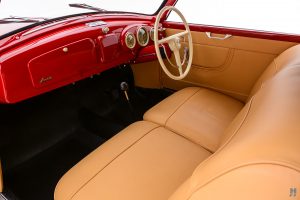 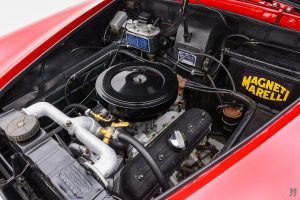