A truly unique one-off cabriolet created by the masters at Pininfarina. Impeccably restored and sorted for road use.

Understated and elegant, this 1949 Bentley MkVI wears a very special and unique one-off cabriolet body by Pinin Farina, commissioned by Dr. Willi Spieler of Switzerland. Chassis number B435CD was cleared from chassis testing in May of 1948, before being shipped to Turin to receive its new body. Personally penned by Batista “Pinin” Farina, the MkVI was bodied under his supervision and completed in time to be unveiled at the 1949 Geneva Salon. It was then delivered to the selling dealer, and assigned its first registration, BM1949. A scant few Bentley MkVI chassis were bodied by the great Italian Carrozzeria, the most famous of those being fixed the Facel-built fixed head coupes. It is believed that no other open cars were constructed in the same style as this. It is said that Batista’s son Sergio as well as his grandson Paolo felt this elegant Bentley cabriolet was one of their favorite creations from the great designer.

The early life of B435CD was spent motoring around Geneva until the death of the Dr. Spieler. It then passed to a Canadian enthusiast who carefully disassembled for restoration, selling it to a noted enthusiast Philip Chartrand. Dr. Chartrand restored the car with the help of his friends, having the drivetrain rebuilt by highly respected marque experts Frank & Bill Cooke of Vintage Garage in Massachusetts. Problems with the initial work led Dr. Chartrand to hand the car over to Richard Grenon Antique Auto Restoration for a professional, concours quality restoration. It later received its lush blue interior and blue mohair hood from Hilborn Motor Car Interiors of Reseda California. B435CD was shown extensively and received many accolades including a Best in Class (Pininfarina coachwork) at the 1993 Pebble Beach Concours d’Elegance, Best in Show at the 1997 British Invasion in Stowe, Vermont, a second appearance at Pebble Beach in 2006, and a First Prize at the Cannes Concours d’Elegance in 2013. 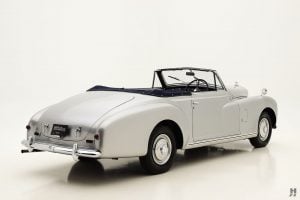 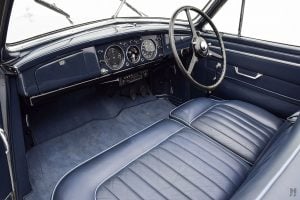 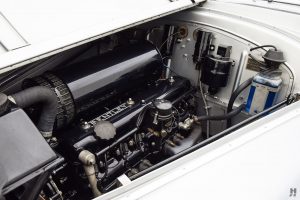