The last of 18 “El Glaoui” series bodies by Figoni et Falaschi built and one of just 9 known survivors. A concours quality motorcar in the finest French tradition of Les Grandes Routieres.

This 1948 Delahaye 135M, S/N 801620, is one of those original El Glaoui series cabriolets, believed to the last in the series of 18 cars and one of just 9 known to survive today. Originally, S/N 801620 was ordered by an Englishman, Mr. B. Grieg after he visited the Paris Auto Salon and fell in love with what he saw on the Delahaye stand. At great cost, he ordered his 135M with a Figoni et Falaschi body, on the assurance it would be unique. While each car in the El Glaoui series was built to a common theme, they were indeed unique in detail, particularly in the treatment of the front end, the shape of the grille and differing chrome embellishments on the body sides. It is believed that Mr. Grieg felt his car wasn’t as unique as he had hoped for, but regardless, he enjoyed it for a number of years in his native England. In the 1960s, it then became part of the collection of fellow Englishman Mr. Hubert Rees. Mr. Rees then sold the car in 1971 to A.K. Wilson, a Toronto-based enthusiast and connoisseur of French motorcars. Following Wilson’s passing, the Delahaye joined the collection of William Anderson of Massachusetts who oversaw its restoration and subsequently showed the car in multiple events around the country, earning a CCCA National First Prize along the way. It then passed through two very significant collections, that of Judge Joseph Cassini and then to James Patterson of Louisville, KY, before most recently becoming part of an important private collection of coachbuilt French automobiles.

Today, 801620 presents in stunning condition in the elegant livery of black over a lush red interior. Paint and body quality are exceptional, the car having been preserved in superlative condition since its restoration. Fit and finish are outstanding, and the brightwork presents in fine order. On this car, the archetypal Figoni “sweepspear” treatment is toned down in favor of linear chrome accents on the body sides, while the black Stayfast three-position top, black wall Michelin tires and chrome wire wheels lend a particular subdued elegance to this exquisite automobile…………………………….. 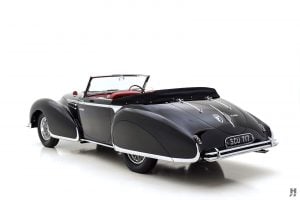 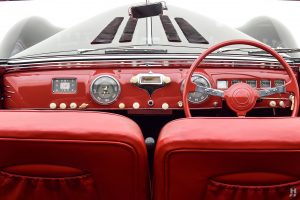 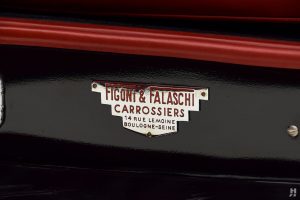 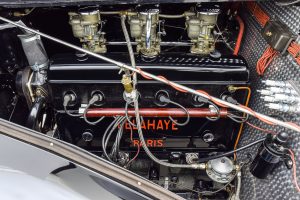