Exquisitely presented, one-off Pinin Farina-designed coachwork. One of the most influential and important designs of the post-war era.

Pinin Farina had a lot of experience with the Aprilia platform, having designed saloon and cabriolet models offered through the Lancia factory catalog, as well as several bespoke models before the war. For this car, however, he created an extraordinary cutting-edge design, symbolic of the burgeoning optimism in post-war Italy. Chassis number 439-11844 was delivered to Pinin Farina in 1946, where it was clothed in this bold and modern two-plus-two cabriolet body. The incredible design features smooth sides, without so much as a trace of traditional separate wings that were still in-vogue for the era. The grilles and headlamps are beautifully integrated, and the body is noticeably unadorned, with just a simple chrome rocker molding used to punctuate the clean, slab-sided bodywork. This is a remarkable display of restrained elegance and a tremendously important piece of industrial design from the immediate post-war era.

It is believed that this Lancia was shown at the Geneva Salon, finished in white or a light gray color at the time. It soon came to France where it was registered from 1949-1965 in the name of Roblou, a French Lancia importer in Neuilly Sur Seine. Its whereabouts became unknown for several decades until 2010, when it was discovered in Northern France by respected Belgian dealer Bernard Marreyt. It was subsequently returned to Italy where it was treated to an exhaustive 3-year restoration. Now presented in what is believed to be the original livery of blue over a deep burgundy interior, it remains every bit as striking as the day it was presented. Paint quality is excellent, with the clean, unadorned coachwork appearing straight and properly fitted, doing justice to Pinin Farina’s restrained elegance. Exterior brightwork is limited, all of which present fine condition. We are particularly fond of the subtle “Pinin Farina Speciale” badges that adorn the flanks and the unique chrome turbine-style wheel covers……………….. 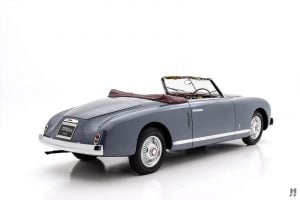 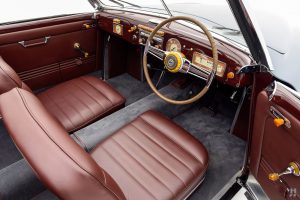