One of 57 TB Tickfords built and fewer than 30 known survivors. Fastidiously restored by marque experts to award-winning concours standards. A charming and desirable Pre-War MG.

We are delighted to offer this TB Tickford, chassis number TB 0440; a charming and important pre-war MG with a rich and well-documented history from new, and one of fewer than 30 known TB Tickfords in existence. Fully restored by respected marque experts Safety Fast Restoration of Mansfield, Ohio, this award-winning example presents in outstanding condition. According to T-Type registry information, TB 0440 was first delivered to G. Kitchingman of Leeds, Yorkshire, England and assigned the registration number HUM 7 on August 3, 1939. Documents including the UK registration booklet show HUM 7 was delivered in red over biscuit with a fawn top. It changed hands out of the Kitchingman family, and in the late 1960s, was discovered for sale by Christopher Orr. The teenage Orr and his father were both avid pre-war car enthusiasts, so they decided to have a look. They found HUM 7 in a small garage in Swinton, with the engine out and in the back seat, but otherwise complete and still in its original red livery. They settled on a price of £40 and towed the car home behind the family’s Riley RME.

Over the course of the next year, Christopher and his father sorted the MG out, eventually passing the MOT test just in time for Christopher to head to University. A 2006 letter from Christopher describes how the little TB Tickford served him well through school and how the car became a well-known fixture around campus. Eventually, using HUM 7 as everyday transport became too impractical, and Christopher turned the car back over to his father, who would eventually sell it on in the mid-1970s. By the late 1970s, HUM 7 left England and headed for Australia. Purchased by the York Motor Museum, they began the restoration process before passing the car on to a fellow Aussie named Harry Pyle in 1983. Mr. Pyle would continue to carefully research and restore the MG, going so far as to travel to England to meet with the widow of the original owner. In 2002, Mr. Pyle sold the nearly-restored HUM 7 to its current owner, an American MG enthusiast and collector. Upon arrival in the ‘States, HUM 7 was handed over to Tom Metcalf of Safety Fast Restoration, who would perform a comprehensive, thoroughly researched, nut-and-bolt restoration to world-class standards. An extensive history file documents the process and the great lengths that were taken to ensure the car’s correctness and detail. The only notable deviation from standard was the color choice, changing the car’s original red to an incredibly handsome two-tone Oxford & Cambridge Blue livery with blue interior and fabric hood…………………… 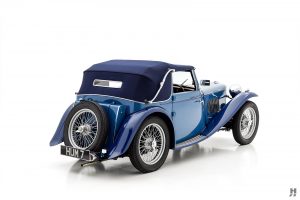 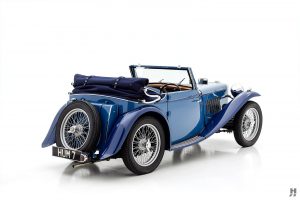 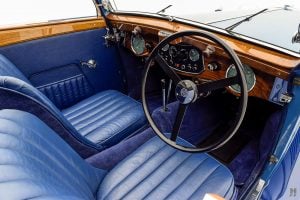 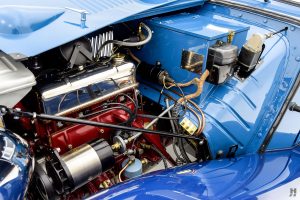