Inspired by the great 1934 Packard Twelve LeBaron Sport Phaeton, this striking 1937 Packard is a genuine 15th Series Twelve, wearing custom one-off coachwork and presented in stunning condition. This particular chassis was originally sold by Los Angeles dealer Earl C. Anthony, Inc. wearing limousine coachwork. Somewhere along the way, the limousine body was removed and never replaced. Many years later, the chassis was discovered on the East Coast, mechanically complete but missing most of the rear body. The car was purchased by a German collector, who commissioned the mechanical restoration as well as the design and construction of the gorgeous body it now wears. The car was handed over to Trevor Hirst Restoration and Coachwork in the U.K., where the chassis was carefully stripped down, and, alongside the engine, fully restored using many genuine parts sourced from American Packard experts.

The owner drew his inspiration from the LeBaron Sport Phaeton which was an earlier design than his 1937 chassis, posing some issues with proportion and fit which were overcome using sophisticated computer-aided design, as well measurements taken directly from a genuine example in California. An intricate ash frame was built to support the skin, and the panels were crafted using traditional English coachbuilding techniques. Details such as the windscreen frames, door hinges and convertible top frame were engineered and hand built in Mr. Hirst’s workshop. The level of detail and quality of the craftsmanship is truly astounding, and in spite of the modern time line, this is a truly coachbuilt Packard in the most traditional sense. 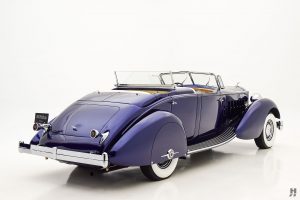 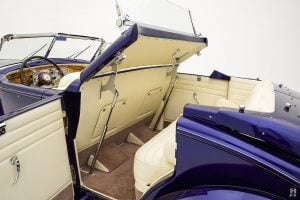 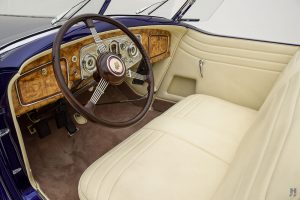 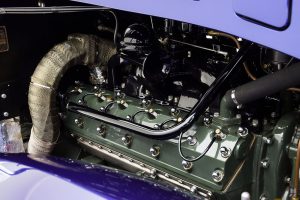