A breathtaking, numbers-matching example of Jaguar’s revolutionary debut sports car. Class winner at the 2015 Pebble Beach Concours and recipient of 999.8 points in JCNA concours competition. Beautifully sorted for show or use in the world’s premier driving events.​

Fabulously presented in British Racing Green with a saddle leather interior, this SS 100 Jaguar is a gorgeous example of the quintessential pre-war English sports car. Chassis number 49026 is one of just 198 SS 100s built through 1938 and is a superb motorcar in every respect. The accompanying Jaguar Daimler Heritage Trust Certificate shows 49026 was completed on December 24, 1937, and dispatched through Henlys Limited of London – the official SS/Jaguar distributor at the time. The car was originally finished in black with a gray interior, and fitted with the 2 ½-litre six-cylinder engine good for 100 horsepower. The original owner is not known; however, the car came to the United States sometime in the early 1960s, eventually coming into the stewardship of Mr. Robert Wood, a successful businessman and philanthropist from Allentown, Pennsylvania. The SS 100 stayed quietly in Wood’s collection for the next three decades. In the late 1990s, it transferred to Gary Ford, who undertook an extensive cosmetic restoration, resulting in a Best in Class at the 2002 Amelia Island Concours d’Elegance.​ 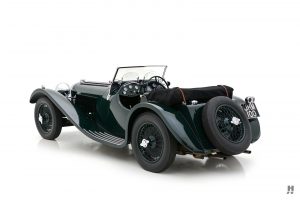 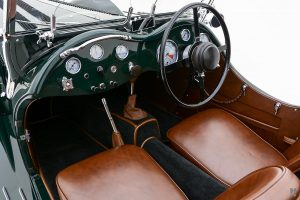 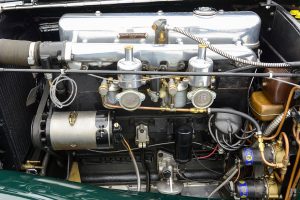