A highly-desirable Type 135 Coupe des Alpes with sublime open coachwork by Henri Chapron. The subject of a no-expense-spared restoration and a class winner at the 2016 Pebble Beach Concours d’Elegance. Extraordinary history from new and superb in every respect.

The story of this extraordinary Delahaye 135 roadster begins in May of 1937, when chassis number 47545 left the Delahaye works equipped in the coveted high-performance Coupe des Alpes specification, with a the triple-carburetor 3.2-liter, 18CV engine, and traditional four-speed manual gearbox. The rolling chassis traveled across town to the storied workshops of France’s favorite carrossier, Henri Chapron. There, it became the second of only seven Type 135s fitted with this stunning roadster design, with flowing wings and a gorgeous swept tail with an integrated spare wheel – considered one of Chapron’s most exceptional pre-war efforts. By the 21st of July, 1937 it was registered in the name of its first owner, Mr. Cyriel Depery. Mr. Depery was a young industrialist, clearly enjoying the fruits of his success. As war overtook Europe, he is believed to have played a role in the French Resistance movement, somehow managing to hide this very special car from the Germans. A photograph dated Sunday, August 20th, 1944, shows Depery at the wheel of this Delahaye, chauffeuring three other gleeful members of the Resistance in a parade celebrating the liberation of Annecy. 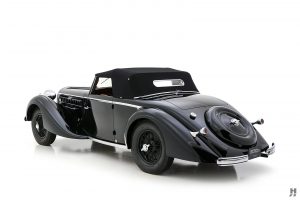 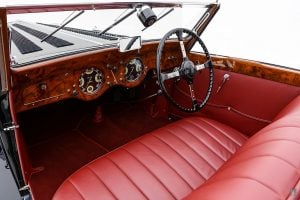 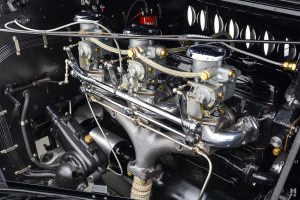