Nobby Clarke, the long-time head of Hendon-based Works Service was a stalwart of Bentley Motors and an integral part of their motorsport success. He was a loyal Bentley man and remained so even after the Rolls-Royce takeover, still tending to owners who preferred to work with “the old guard.” Following the sale to Rolls-Royce and revamping of the Bentley lineup, a number of new components for 3-litre and 4 ½-litre cars remained in stock at Bentley’s Works Service Department, well after the main production moved to Derby. To use those remaining stocks, Clarke first took in four pre-owned 3-litre cars and thoroughly reconditioned them using as many new components as possible. Each of those was renumbered with the “RC” prefix (for ReConditioned) and sold to new clients.

In addition, Clarke and his team built six complete 4 ½ – litre cars, which shared the same chassis prefix despite being entirely new from the ground up. The six “RC” 4 ½ litre cars were built using the latest and best components available. Each one received the latest heavy-gauge chassis, a D-Type gearbox, six-litre rear axle, and 12:1 ratio steering box. Five of the cars were fitted with Vanden Plas tourer coachwork (much in the style of the contemporary Derby cars), while the sixth received a Corsica-built saloon body. The RC series is a fascinating footnote in the history of Bentley Motors, and given that they were built by Bentley employees using Cricklewood made parts, they are recognized and welcomed by the Bentley Driver’s Club as true Vintage Bentleys, and therefore eligible for their events.

Chassis number RC44 is the fourth of the six RC-series built under the supervision of Nobby Clarke. It is a marvelous car, with just five owners and well-documented history back to new. Documents show that Mr. Charles Clare Regnart was the first caretaker of RC44, taking delivery in September 1936. According to the original English VE60 registration booklet, it was assigned the registration number EMF 115. Regnart owned RC44 through 1959 when Ralph Denby of Sussex acquired it………………………… 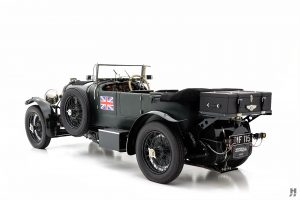 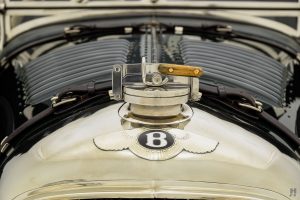 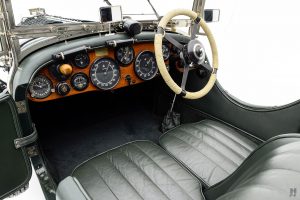 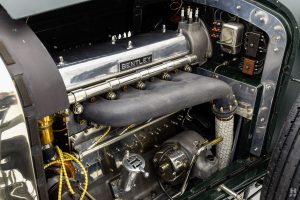