One of only a few known survivors from a limited, two-year production run. Dramatic styling inspired by the legendary Silver Arrow show car, and mighty 175-horsepower V12 engine. A superbly restored example of the ultimate production Pierce-Arrow.​

This stunning 1934 Pierce-Arrow 1245 Silver Arrow is one of just 1,740 cars produced in total by the company that year. As Pierce emerged from its partnership with Studebaker, it introduced three new models to the buying public: The eight-cylinder 840A, and the twelve-cylinder 1240A and 1248A. Of those, the Silver-Arrow coupe sitting atop the big 144-inch wheelbase 1240A chassis was the most dramatically styled. Buyers could equip their Silver Arrow coupe with either the eight or twelve-cylinder engine. Ultimately, not enough buyers stepped forward to make much difference in Pierce-Arrow’s bottom line, and the company filed for bankruptcy in August 1934. Unfortunately, few of the production records survived when receivers dispersed Pierce’s assets a few years later. But marque experts estimate that approximately 43 Silver Arrows left the works in 1934, along with an additional four cars in 1935. Historians believe that about 16 of these incredible automobiles are known to exist today. 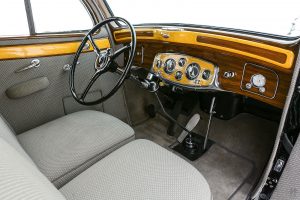 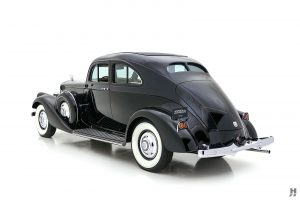 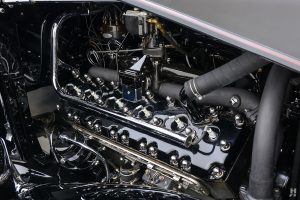