A handsome example of the rare 840A Silver Arrow, presented in attractive colors and with a pleasing, mellowed restoration. Finely detailed and Wonderfully suited for touring and events.​

With sales in free-fall, Phil Write was brought aboard as a consultant to design a new flagship that would show the world what Pierce-Arrow could do. Write produced a stunning, streamlined sedan based on the twelve-cylinder chassis, dramatically named the Silver Arrow. It made its grand debut at the 1933 New York Auto Show with the slogan “Suddenly it’s 1940!” The sensational machine featured fully enveloped front fenders, no running boards, and a distinct fastback roof treatment with a triangular rear window opening. It was a masterpiece of modern design; however, the shocking $10,000 price tag kept even the wealthiest customers away during the austere early 1930s. Only five were built, although the highly advanced styling went on to influence Pierce-Arrow’s regular production cars later in the decade. In 1934, The Silver Arrow name reappeared on a flagship coupe which drew heavily from the Phil Write-penned original. Clearly adapted from the show car, albeit with more conventional features, the two-door coupe was available on the eight-cylinder or twelve-cylinder chassis. Unfortunately, neither the show car nor the production version could save Pierce-Arrow, and in 1938, the company folded, and its assets were unceremoniously sold off.

Despite Pierce-Arrow’s Depression-era struggles, they continued to produce some of the most beautiful cars of the time, exemplified by this marvelous 1934 840A Silver Arrow Coupe. Presented in a handsome, understated two-tone dove gray livery, this Silver Arrow is a lovely example with a matured, well-maintained older restoration. The Silver Arrow was one of just three body styles available on the 148-inch wheelbase chassis, and this car is one of only 1,740 Pierces produced in total in 1934. While the production Silver Arrow is somewhat more conventional than the show car, it is still a dramatic design, and this car, with its lack of side mount spare wheels and light color scheme, stays true to the original concept. The paintwork is in good condition all around, showing a few minor touchups and imperfections that are consistent with the age of the restoration. Red artillery wheels provide a nicely-judged visual pop, which repeats with the red coach stripes on the body. As with most Pierce-Arrow bodies, the Silver Arrow was built in-house, and it proudly displays a “Body by Pierce” badge on the cowl. 1934 models used markedly less brightwork than before, however, the bumpers, grille, wheel décor, and other various trim parts are excellent, showing only minor polish marks in the finish. 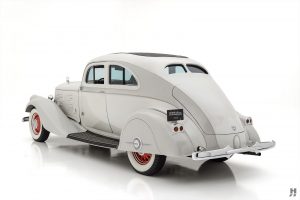 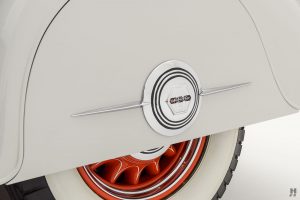 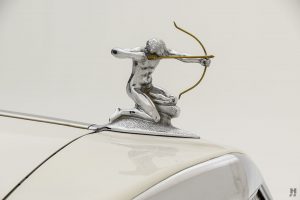 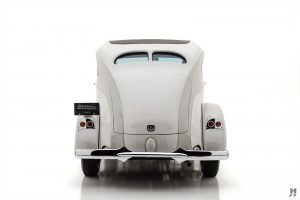