This 1934 Derby Bentley, chassis B136 AH, is a handsome and exquisitely restored car wearing unique close-coupled “Saloon Coupe” coachwork by Freestone & Webb. It was originally delivered in June of 1934 via Dex Garages of Newcastle-on-Tyne, England. The first registered owner was William L.P. Miesegaes, also of Newcastle. Period photos of this car, as shown in Michael Ellman-Brown’s book The Silent Sports Car reveal the distinctive coachwork remains in the same configuration as it was originally delivered; with its low roofline, upholstered top with faux irons, and large boot with rear mounted spare and luggage rack. The large boot and rack hinted that Mr. Miesegaes intended to use his Bentley as a long distance tourer.

The extensive history file contains build sheets and works service records that show the car was regularly cared for during Mr. Miesegaes’ tenure which appears to have lasted through 1951. The Bentley then came Stateside with the second owner, listed as Major S. Levin of Tarzana, California. The next record is from a 1971 RROC directory which lists the car as belonging to Russell Keller, who kept it a further 15 years.  It was then sold to Peter Hageman or Kirkland, WA who kept it until 1995 before passing it to Wilson Borden of Bryn Mawr, PA. It then returned to Hageman in 2004, and following two short-term owners, the Bentley would be acquired by Karl Thomas who would continue to care for it from 2008 through 2018.

Today, chassis number B136 AH presents in beautiful condition wearing a high-quality cosmetic and mechanical restoration that has been exceptionally well-maintained by its passionate owners. The claret red body is accented with black wings and a black upholstered roof, which suits the sporty nature of the body quite well. Panel fit is excellent, and the doors open and close with the precise feel that reveals the quality of the restoration. The fascinating coachwork has a number of unique details including Lucas P100 headlamps mounted on shortened stanchions to maintain a lower profile. The aforementioned boot incorporates the original tool kit on the underside of the lid and the roof features a large sliding sunroof to bring some light into the cozy four-place cabin. As with the paint, the brightwork is excellent, with consistent high-quality plating and good fit……………………… 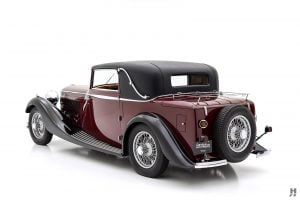 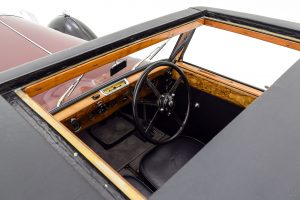 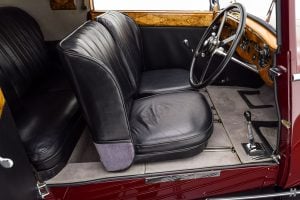 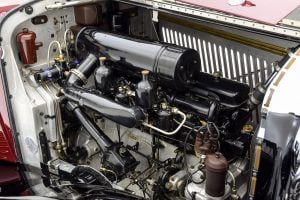