A stunning Marmon Sixteen wearing its original LeBaron coachwork, fresh from a high-level concours restoration. A powerful, striking, and incredibly desirable motorcar for the discerning collector, suitable for virtually any world-class concours event.

It is a rare occasion when a Marmon Sixteen comes to market, and we are especially pleased to offer this exquisite 1933 example, featuring handsome convertible sedan coachwork by LeBaron. Most Marmon Sixteens wore closed sedan and limousine coachwork, so it is a rare sight to see the mighty Marmon radiator grille on an open car. Recently out of a complete, nut-and-bolt restoration, it is finished in an attractive color scheme of blue over black fenders and chassis, with a saddle-brown interior. According to information compiled and provided by D.W. Ridgley’s Marmon Sixteen Roster, chassis number 16 145 947 (engine no. 16880) was in the hands of a Mr. Wilder of Willetts, CA, in the early 1950s. It passed through a series of owners in the 1950s and early 1960s and nearly suffered the indignity of becoming a parts car, yet was mercifully kept together. In the late 1970s, then-owner Mr. Marshall B. Beldon started a restoration that never quite got off the ground and stalled by the mid-80s. The Marmon then went to the Canton Classic Car Museum and remained in a partially restored state before Hyman Ltd acquired it in 2011. We placed the car with its most recent owner, who commissioned this cost-no-object restoration beginning in 2012. 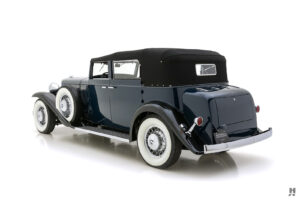 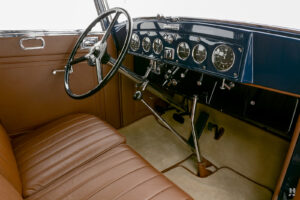 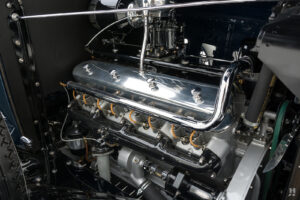