Stunning one-off coachwork by DeVillars of Paris, fitted from new to this documented export chassis. An important and unique example of Chrysler’s finest classic.​

This beautiful Chrysler is believed to be the only Imperial bodied by de Villars. While the car’s earliest history in France is still being researched, we do know from records supplied by Fiat Chrysler Automobiles that this car, number 7803694, was dispatched on July 10th 1933. The build record is stamped “CHASSIS EXPORT”, with the destination noted as Paris, France. While the historical trail goes cold at that point, it picks up again in 1968 when the car was purchased by a Polish national who lived in France, named Pierre (Piotr) Sanguszko, who kept the car until his passing in the late 1980s. From there, the Imperial found its way to the well-known collection of Mr. Rene Cocheteux, also of France, who used the car regularly, participating in various events and tours in Europe.

Today, this magnificent automobile remains in sound and complete condition, suitable for freshening or a full restoration. At some point in its life, the rear fenders were modified and the original Hermès trunk was replaced, though the majority of the body remains intact and in quite good condition. Judged on its own, the one-off de Villars coachwork is simply beautiful; a fine pairing with the long wheelbase, low-slung CL Imperial chassis. It is uniquely sporty yet elegant, with its low ride height and the CL’s signature ultra-long hood stretching nearly to the base of the windscreen. Riding on wire wheels (with dual sidemount spares) and black wall tires, the Chrysler takes on an almost sinister look. The Victoria-style roof treatment allows for three positions; fully closed, half open or fully open. With the roof erect or folded, it is a supremely handsome automobile; an exquisite example of 30’s French high-style.

The original, factory fitted engine (number CL 1399) matches that indicated on the build records. It runs quite well, the straight-eight sounding smooth and healthy. It appears that this car has never had a full restoration, rather having work done through the years only as needed. As such, many of the components appear original and the Imperial has since taken on a warm patina with the honest appeal of a well-loved motorcar. While it could be used and enjoyed as-is with minimal effort, this unique CL Imperial is an important, highly desirable collector car that deserves a comprehensive, concours-level restoration to return it to its original glory, and we are confident it would be a contender at virtually any major concours event in the world. The one-off pairing of de Villars and Imperial created one of the most breathtaking designs to ever grace a Chrysler chassis; a pairing of excellence in French design and American engineering…………………….. 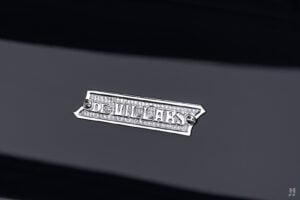