Stunning LeBaron coachwork on the flagship CL chassis. Restored and maintained by respected specialists. Pebble Beach award winner. One of the Classic Era’s most beautiful automobiles.​

For the 1932 CL Imperial, Chrysler stretched the chassis to 146 inches and revised the styling with a swept and raked grille, cowl-less hood, and gracefully flowing fenders. Hydraulic brakes, adjustable seats, and hydraulic dampers all carried over to the CL, so performance was up to Chrysler standards. Thanks to the advanced suspension geometry and powerful 8-cylinder engine, the CL Imperial is one of the finest driving cars of the period.

Considered among the most elegant expressions of classic era style, this 1933 Chrysler CL Imperial custom wears gorgeous Dual Windshield Phaeton coachwork by LeBaron Carrosserie. Of the 151 CL chassis produced in 1933, just 50 cars wore “factory custom” coachwork by LeBaron, and this is one of 17 known survivors of this style. Distinguished by its split windshield, rakish profile, and retractable rear windscreen, the LeBaron Phaeton is one of the most evocative and visually stunning bodies created for the CL Imperial chassis.

The early history of this car is not fully documented; however, it is believed that it was delivered new in Washington D.C. and that it later belonged to Mr. Paul Vanderbilt. In approximately 1954, Homer W. Fitterling discovered it in Chicago and added it to his ever-growing collection, which would eventually exceed 300 cars. According to marque experts, the LeBaron Coachwork was in excellent condition when Fitterling found it, although the chassis had accumulated considerable mileage. At the time, he owned an identical CL with much lower mileage and a limousine body, so he decided to combine the best aspects of the two cars, placing the stunning dual windshield LeBaron body on the excellent low-mileage chassis of the limousine. At a time when car restoration was in its infancy, this was a common practice among enthusiasts and an accepted method to ensure these wonderful cars continued to live on. 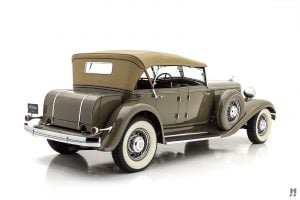 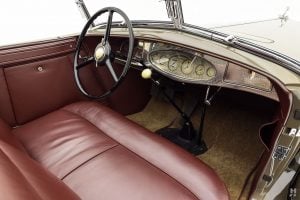 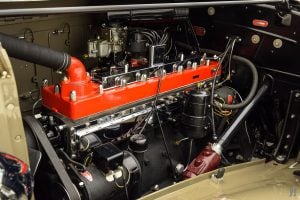 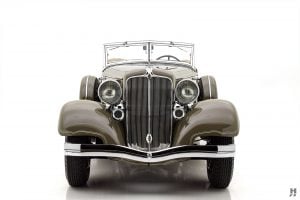