A rare opportunity to acquire a genuine, Category 1 Certified Speedster with numerous rare and desirable options. Fully restored and prime for touring or show.​

Beautifully restored and presented in a striking color combination, this 1932 Auburn 8-100A Speedster has been certified as a Category One car by the Auburn Cord Duesenberg Club. It has been inspected by experts who determined this car retains its original chassis, engine, rear axle and other major components, and most importantly – its original boat-tail coachwork by Union City Body Company. For 1932, Auburn offered the Speedster body as an option on both the 8-100 and the 12-160. Just 63 cars would be sold with the 8-cylinder engine in 1932 and this example is believed to be one of the first six cars produced. This car is also rather unusual in that it features numerous options and factory accessories such as a radiator stone guard, metal covers for the dual sidemount spare wheels, a pair of steerable Pilot Ray driving lamps, chrome wire wheels, a Tropic Aire heater and a Philco radio.

It is believed that this car was first delivered in California, and was originally finished in black with red body trim. The early history is unknown, however the story picks up in the 1960s when it was owned by Mort. C. Engdahl of Carmichael, California. During Engdahl’s tenure with the Speedster, it was restored and the color was changed to off-white with red trim. In the 1970s the Auburn was on display in an Oklahoma restaurant. From 1978 to 1984 it belonged to Rick Carroll of Jensen Beach Florida, who then passed it to two fellow Jensen Beach residents – Edward Kirkhart and Joseph Shawfield. A few years later in 1988, the Auburn was acquired by the renowned bronze sculptor, painter and automobile enthusiast Stanley Wanlass of Astoria, Oregon. In 1994, Wanlass sold the car where it joined the collection of his friend, and it has remained in the care of that family since……………………………………… 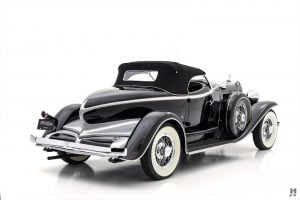 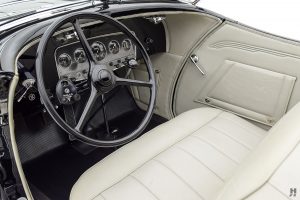 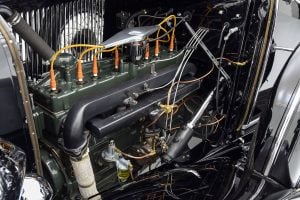