A stunning Phantom II with unique one-off coachwork by Hooper, and well-known provenance from new. Award-winning restoration, shown at the Pebble Beach Concours in 1997. Mechanically sorted with Laycock overdrive.

Our featured Rolls-Royce Phantom II is a truly striking example, wearing one-off and distinctly sporting Two Seater Open Sports coachwork by Hooper. A well-documented example, chassis number 23GN has worn this evocative body from new, ordered by the noted English businessman, sportsman, and philanthropist Sir Julien Cahn. RROC records show he ordered this Phantom II on October 18, 1929. It arrived at Hooper at the end of February 1930, and the installation of the coachwork (Body Number 7351) was completed by April 1930. It was delivered to Cahn later that month, registered as GF7844. Cahn took over his family’s furnishing business and expanding aggressively, ultimately controlling more than 300 stores across England. His philanthropy led to his knighting in 1929, and he was made a baronet in 1934 for his charity work. He is best known for his keen interest and skill in fox hunting and especially in the sport of cricket, where he enjoyed a successful career as both a player and team owner.

Sir Julien’s love of sport is reflected in his choice of coachwork for the Phantom II. While most Phantoms were clothed with elegant, formal bodies, this car is quite the opposite. The body is trim and clean, with a purposeful appearance befitting a wealthy sportsman. The design features a lovely boat tail treatment at the rear, abbreviated front wings, and step plates in lieu of full running boards. Bumpers were omitted from new, and dual rear-mounted spares lend a fabulous character, making the car appear even lower and longer than it already is. While officially designated a two-seater, the unique dual-cowl design can accommodate four passengers thanks to a discreet rear cockpit with a separate folding windscreen. When not in use, the seat and windshield fold to create a flat rear deck. 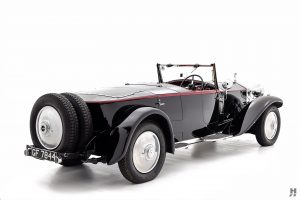 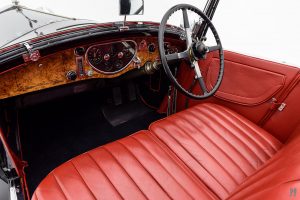 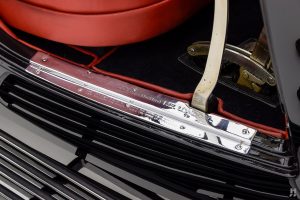 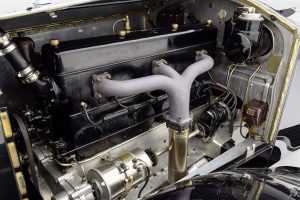