A rare and handsome flagship Buick with factory-built roadster coachwork and powerful overhead-valve inline-six. The subject of a photo-documented, body-off restoration, matured nicely with time and enjoyment. One of very few CCCA Full Classic Buicks, suitable for touring and driving events.

Beautifully restored and presented in a handsome blue and black livery, this 1930 Buick Series 60 is one of fewer than ten factory-built roadsters known by the Buick Club of America. This example was the subject of a high-quality, body-off, nut-and-bolt restoration performed in the late 1990s, and it has been very well maintained in the years since. In 1996, Mr. P.E. Kneedler of Rancho Cordova, California, discovered this rare Buick tucked away at a winery in nearby Placerville, California. Photos taken shortly after its discovery reveal the Buick was a complete and driving car before the restoration, albeit a bit tired with many layers of paint on the body. After removing years of old paint, the restorers found the body to be remarkably good, with virtually no corrosion in the sheet metal and excellent original wood. There was little doubt the big Buick had lived a charmed life out on the west coast. The comprehensive, photo-documented restoration included stripping and repainting the chassis, along with a complete overhaul of the driveline. 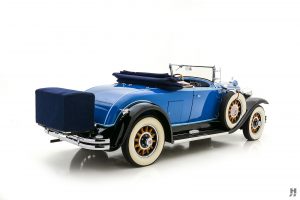 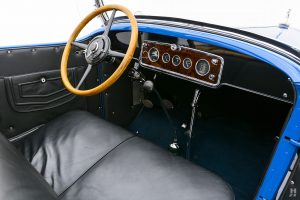 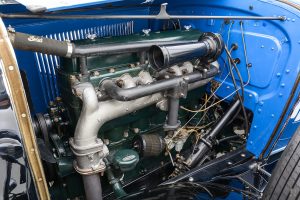