Our featured Type 46 is chassis number 46524. According to information in Barrie Price’s book Bugatti Type 46 & 50, as well as the definitive reference guide La Petit Royale, this particular chassis was ordered in a batch of 29 cars (a mix of type 46 and 49) by Swiss Bugatti agent Bucar of Zurich. The first owner is listed as Hans Lindt of Stockholm, Sweden (incorrectly noted as “Schmidt” by Mr. Price). It is understood that the car was delivered wearing the optional alloy wheels and ordered to receive four-seat Gangloff Touriste cabriolet coachwork. Upon completion by Gangloff, it was driven back to Molsheim, collected by Mr. Lindt, who drove the 1,700 KM across Europe and back to Stockholm; a task for which his Type 46 was no doubt ideally suited.

Following Mr. Lindt’s time with the car, it was purchased by Rene Chatard, a fashion boutique owner, and well-known Bugatti connoisseur. It is believed that sometime during Chatard’s ownership, the body was separated from the chassis and fitted with blackout lights and rudimentary seats, perhaps to make the car unattractive to occupying forces during the war. In 1940, it was equipped with a “Gazogene” unit in an attempt to run the car on wood fumes instead of gasoline, but the experiment was a failure, and the car was parked up. Chatard and his mistress were killed in 1955 when his Type 57 Atlantic was struck by a train. Chatard’s widow sold 46524 along with six other cars to the famous Bugatti collector Jean De Dobbeleer. He would quickly sell this car as a running chassis with radiator, bonnet, and cowl, to Bob Estes and Otto Zipper of Precision Motor Cars in California, as noted in H.G. Conway’s The Bugatti Register. At some point, the car joined the Harrah Collection in Reno, still in the same state as De Dobbeleer found it in 1956……………… 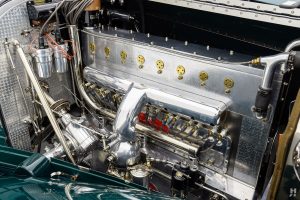