A rare Barcelona-built Hispano-Suiza with beautiful one-off coachwork. Painstakingly restored to a high standard, and suited for touring and concours events worldwide.​

Wearing striking seven-passenger phaeton coachwork, this Hispano-Suiza T49 is the subject of a well-researched and meticulous restoration. Per information provided by the most recent owner, this Barcelona-built T49 was delivered new to Argentina, where it spent most of its early life. Upon receiving its coachwork at the hands of a local Argentine coachbuilder, Carroceria V. Marrugat y Cia, Buenos Aires, the car was sold to the Argentine government and possibly used to transport the newly re-elected president, Hipolito Yrigoyen.

Following Yrigoyen’s downfall, the Hispano was sold or otherwise disposed of by the new government, disappearing from the public eye. In 1955, an American executive with Texaco Oil Company working in Argentina discovered the Hispano-Suiza in a barn and somehow managed to get the car out of the country and shipped to New Jersey. The trail cools off again until the mid-1980s when the car resurfaced in a disassembled state in the collection of Richard Askern of Indianapolis, Indiana. He held on to the Hisso for many years in hopes of restoring it, but eventually conceded the project, and in 1998 he listed the T49 in Hemmings Motor News.

The most recent owners acquired the car from Askern, and soon embarked on a meticulous restoration. The project consumed several years, as parts and information proved scarce. A full teardown and rebuild of the engine were performed, and the chassis and body restored to a high standard. Their efforts were rewarded in 2017 with an AACA National First Prize at Bettendorf, Iowa, followed by a People’s Choice Award at the 2017 Dayton Concours d’Elegance, and a Distinction Award at the 2018 Cincinnati Concours. In addition, the car has been awarded Full Classic™ status with the CCCA. 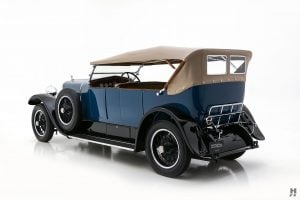 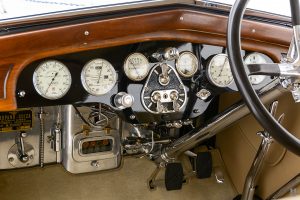 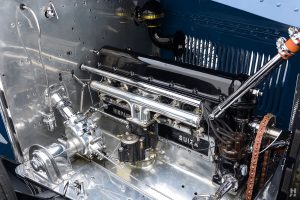